You are here: Home / Autobiographies, Biographies & Memoirs / Tsunami Reflections by Charles A. Pomeroy 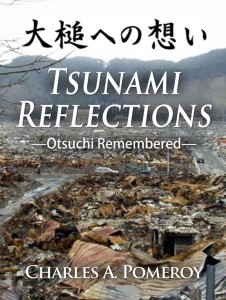 What inspired you to write your memoir?
The inspiration for this book came on my first visit to Otsuchi seven weeks after the tsunami. While viewing the bare foundations of our former home there, I was struck by the absolute stillness of a now dead town, interrupted occasionally by the distant sound of backhoes moving debris. That eerie silence triggered an overwhelming desire to share with the world the story of Otsuchi and one family’s travails as presented in “Tsunami Reflections.”

About your Book:
Tsunami Reflections: Otsuchi Remembered by Charles A. Pomeroy. An Imprint of Telemachus Press in paperback and eBook formats.

With the world’s attention fixated on the Fukushima nuclear disaster spawned by Japan’s earthquake/tsunami of March, 2011, the eviscerated port towns northward along the Sanriku coast received scant news coverage. One of these, Otsuchi, the hometown of the American author’s wife and his retirement home from 2004, suffered the highest percentage (9.3%) of its population either dead or missing. This memoir provides a look at that tragedy on a human level.
Following a brief Introduction of the author and his Japanese family, Chapter 1 presents an overview of the situation at the time of the 9.0 magnitude earthquake and resulting tsunami as well as a timeline of unfolding events in the form of email exchanges.
Chapter 2 then sets the scene by describing Otsuchi’s geographic location, its pre-tsunami key districts, topography, and historical development as well as the nearest inland town, Tono, which becomes the family’s post-tsunami base of operations.

Chapters 3 and 4 establish a sense of place and emotional attachment through descriptions of the family home and neighborhood as well as the cultural events that strengthened community relationships, including annual festivals and Buddhist rites of Obon for the dead.

Chapter 5 outlines the history, scientific background, and details of past earthquakes and tsunami prior to describing the “Big One” of 2011 that destroyed Central Otsuchi. Survival stories are told and explanations of why so many died are presented. Recounted, too, is the first-hand experience of the Sea Shepherds, an ocean conservation group, followed by descriptions of videos of which one shows inundation of family neighborhood.
Chapter 6 provides an overview of the tsunami’s aftermath and the humanitarian activities of volunteers. This is followed in Chapter 7 by the author’s first-hand descriptions of the devastation in Otsuchi and surrounding areas as seen on post-tsunami visits that inspired him to relate this story.

The more emotional section of the book, Chapter 8, describes the search for missing relatives, mass funerals for the dead and missing, flowers reappearing amid the ruins, identification of a family member’s remains, interment of ashes, and the 2011 Buddhist commemoration of the dead.
Chapter 9 brings a lighter mood with descriptions of aid donations to the town from Otsuchi’s sister-city of Fort Bragg, California, and humanitarian contributions in general as well as a failed Tokyo donation program. The chapter ends with an examination of the Japanese custom of giving “condolence” money and a digression involving Hawaii.

The book concludes, in Chapter 10, with an outline of the master plan for the reconstruction of Otsuchi and resurrection of the town’s businesses in the face of ongoing depopulation. Included is a critique of the Japanese government’s response to the disaster as well as comments on the local media. The author ends his memoir with thoughts on future possibilities for revitalizing the town.
Many photos and maps provide visual references.

This title is available world-wide in both Print-on-Demand (POD) and eBook formats through major book sellers, including Amazon, Barnes & Noble, Apple iBooks, Kobo, Smashwords, and Ingram.

How did you decide how to publish your book and where is it published through:
Suspecting that limited market appeal of such a book would make it of little interest to traditional publishers, especially two years after the event, I decided to self-publish. As a published author, I also knew I would need professional services, especially editing and cover design. I eventually settled on Telemachus Press for these services and their imprint.

How do you see writing a Memoir as different from writing other genres of books?
Not that much different, except writing a memoir means that in certain parts you will be speaking from your heart on an emotional level. This requires a delicate balancing act.

Author Bio:
Charles A. Pomeroy
Charles A. Pomeroy emerged from a nomadic childhood in the Mid-west—he was born in Beloit, Wisconsin—to enter another nomadic life in the U.S. Navy starting in 1947 at the tender age of 17. He served nine years, of which eight were as an aircrew member specialized in electronics and included two combat tours during the Korean War. That war also introduced him to Japan, a country that in 1950 was yet to recover from the destruction of WWII.
A later assignment to the Naval Attaché in Rome, Italy, in 1954 and exposure to a world beyond the military awakened in him a desire for a higher education. Serendipitously, his interest in Japanese language and arts led to contacts with the Japanese community in Rome, which inspired his return to Japan in 1957 as a student after his honorable discharge from the U.S. Navy.
Following language school and four years of study in Tokyo at Sophia University (Jochi Daigaku), Pomeroy graduated with a degree in Asian History, with emphasis on the arts. His own attempts at creating art in the form of woodblock prints failed to provide adequate income and he turned his attention to the written word as a way to earn a living. Initially, as a freelancer he translated over a dozen books, ranging from the simpler Japanese Toys to the more complex Chinese Eunuchs. Morphing from freelance translator into a journalist, he worked as a correspondent specializing in coverage of Japan’s healthcare industry from 1966 and until he retired in 2004.
Pomeroy’s personal life was marked by the failure of an earlier, student-era marriage, but he found his life-long mate, Atsuko Kobayashi, in 1986. As well, he eventually became fond of her home town, Otsuchi, in Iwate Prefecture, where they built their retirement home that also included a studio for creating woodblock prints. Their blissful lifestyle there end on March 11, 2011, when the Great East Japan Earthquake and following tsunami destroyed Otsuchi along with towns along Japan’s entire Sanriku coast as well as spawning the Fukushima nuclear disaster. Pomeroy’s return to Tokyo was followed by a return to writing.
As an author, Pomeroy’s first book, Traditional Crafts of Japan (Weatherhill) was published in 1967. In the mid-1990s, as General Editor he focused the knowledge of five colleagues to put together a history book, Foreign Correspondents in Japan (Tuttle), published in 1998. A more recent book, Pharma Delegates, published in 2013, was a commissioned work. His latest book, Tsunami Reflections, presents the little-known story of Otsuchi and its destruction as well as the loss of family members, a story along with those of other Sanriku towns that have been overshadowed by the Fukushima nuclear disaster.