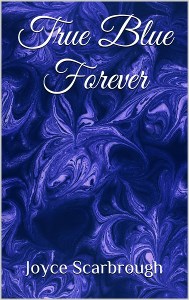 At the fifth grade honors program, three eleven-year-old boys are captivated by a brilliant little red-haired girl named Jeana Russell as she recites the poem she wrote. They know this girl is special, and each boy secretly vows to win her heart. As these four unconventional teenagers grow up together on the Alabama Gulf Coast in the late 1970s, they are bound to each other by relationships as volatile as they are complex. Which boy will end up breaking Jeana’s heart, which one will be her best friend, and which one will be the true-blue love of her life?

What Inspired You to Write Your Book?
My husband and I went to the same high school 13 years apart, so I always wondered if we would’ve liked each other if we’d gone to school together, since I was a band geek valedictorian and he was a three sport jock. So I put characters like that in True Blue Forever, threw in a wise-cracking best friend and a jealous rival and set it all against the background of the beautiful Gulf Coast in the classic rock era.

How Did You Come up With Your Characters?
They’re all fictional, but they’re also amalgamations of people I went to high school with. Some of them may seem like stereotypes, but I think they’ll end up surprising you. And even though True Blue Forever is set in the late seventies and early eighties, some things about high school never change, especially when it comes to falling in love and growing up.

Book Sample
Jeana and Mickey generated heat from the beginning.

Take when they met. It was almost the second quarter of the 1978-79 school year, and the temperature still hovered near ninety. Even for southern Alabama, that kind of heat was unusual for so late in October. The box fans at both ends of the room in Mrs. Langston’s sophomore English class barely stirred the humid air, their somnolent drone only adding to the lethargy typical of sixth period classes.

Jeana took her alphabetically assigned seat at the front of the last row. Her hair clung to her neck in sweaty auburn tendrils, and she lifted it optimistically, hoping for a breeze from the open window. When she felt something move across her damp hairline, she shivered and heard a familiar laugh.

“Is that a hickey on your neck, Jeana?” Wade Strickland took the seat behind her. “Oh, wait. Smart girls don’t go in for no neck sucking, right? Unless maybe it was for a homework assignment.” He leaned up and made kissy noises at her shoulder. “Want to help me with mine, Jeana-baby?”

She flipped her thick curls into his face. “What would you know about homework, Wade Strickland? Besides getting one of your girlfriends to do it for you?”

“I know enough to copy it in my own handwriting,” he replied. “Sandi dots all her i’s with hearts, and I sure as hell wouldn’t want Old Lady Langston to think I had the hots for her.” He mimed an attack of nausea, getting laughs from his buddies Jimbo Sullivan and Lamar Pruitt.

With a roll of her hazel eyes, Jeana took out her notes on The Crucible for a last-minute review before the test. For the hundredth time, she silently cursed the luck that had put Mrs. Sutton’s regular English students in the advanced class after the teacher’s car accident. When she felt Wade playing with her hair, Jeana jerked her head and also cursed the luck that had put all the jocks’ names in the same part of the alphabet as hers.

She tried to concentrate on her notes, but her interest was piqued when she overheard Wade and the others talking about the new boy at school. She had been hearing about him all day but hadn’t seen him herself. He obviously didn’t take advanced classes. Probably just another jock.

“You seen him yet, Wade?” Lamar asked.

“Yeah, no big deal.” Wade sounded deliberately bored. “He’s a Yankee from Oregon or Washington. Somewhere like that.”

“No, you dumbass.” Wade whacked Lamar in the back of the head and Jimbo snorted.

“He’s in my World History class,” Jimbo said, still laughing at Lamar rubbing his head. “Looks like he’s in decent shape. Who knows, Wademan? You might finally have some competition on the old gridiron.”

Mrs. Langston walked into the room, followed by none other than the subject of the discussion, and Jeana saw that his shirt indeed bore the logo of the New York Yankees. The boys might have been interested in his shirt—this was Atlanta Braves territory, after all—but Jeana suspected it was the exquisite way he filled out his boot-cut Levi’s, the wavy brown hair that virtually cried out for fingers to be run through it, and the biceps flexed slightly on the arm holding his books that held the girls’ attention. Jeana couldn’t help taking an appreciative look herself, even if he did appear to be just one more of the Locker Room Set.

“He *is* a damn Yankee,” Lamar said with a derisive curl of his lip.

Jeana was surprised to realize she felt sorry for the boy being gaped at by everyone. He didn’t seem arrogant like most good-looking guys, and he didn’t emanate attitude like Wade. While Mrs. Langston looked at his transfer form, he shifted his weight from one foot to the other, and although he could obviously hear the whispers all around him, he pointedly avoided the twenty-five pairs of curious eyes. When he licked his lips and twin dimples flashed on his cheeks, Jeana drew a sharp breath.

Mrs. Langston looked up over her half-glasses and noticed her students’ rapt attention. “Since everyone seems so interested, I’ll introduce our new student. This is Mickey Royal, and he transferred to Vigor from Kent-Meridian High School in Washington state. Let’s see…” She took off her glasses and looked in Jeana’s direction. “Everyone in the last row, please move back one seat. Mr. Royal, you may take the seat in front of Miss Russell.”

An odd look crossed Mickey’s face momentarily before he smiled at Jeana and said, “Hi.”

“Hey,” she replied, mentally wincing. Why couldn’t she have just said hello?

“The Yankees suck!” echoed from the back of the room, drawing raucous laughter from all the boys and bringing Mrs. Langston to her feet.

“Who said that? I will not allow that vulgar term in my classroom!”

Mrs. Langston narrowed her eyes. “Since you’ve developed this sudden interest in words, Mr. Strickland, you may bring me an essay Monday on ‘The Importance of Having a Good Vocabulary’.” She bent to make a note in her grade book. “I think five hundred words will suffice.”

Wade’s grin disappeared and he punched Lamar in the shoulder for snickering.

“Please clear your desks.” Mrs. Langston began placing the mimeographed papers face down in front of each student. “Mr. Royal, you may begin reading The Crucible in your literature text. The rest of the class is taking a test on it today, but you will have until Monday to prepare. It would be advisable for you to borrow the notes on what we’ve been discussing from someone in the class.”

Jeana heard someone say in her voice, “You can borrow my notes.” Mickey turned to smile at her again, and she saw that his eyes were almost the color of his name.

“Damn, you got it made, Yankee-boy,” Wade leaned up and whispered. “This here is Miss Jeana-the-Brain, and she usually guards her notes closer than she guards her virginity.”

“Shut up, Wade!” Jeana blushed furiously and glanced at Mickey. At least he hadn’t laughed.

Mrs. Langston pushed Wade back down in his seat. “Do we have a problem, Mr. Strickland?”

“No ma’am,” Wade replied. “I was just welcoming the Pride of the Yankees here.”

“No more talking then.” Mrs. Langston sat at her desk and began her test-taking vigil. “Everyone may turn over their tests and begin.”

While Jeana answered the questions, she silently prayed for telekinesis so she could make one of the fluorescent light fixtures fall on Wade’s blond head. She despised Wade Strickland, and Mickey was probably just another jock who would end up running around with him and all the other thicknecks. And why on Earth had she offered him her notes?

She stole another glance at the broad shoulders in front of her and remembered the startling blue eyes and those dimples.

Okay. Maybe she knew why she’d done it, but she would probably regret it.

About the Author:
JOYCE SCARBROUGH is a Southern woman weary of seeing herself and her peers portrayed in books and movies as either post-antebellum debutantes or barefoot hillbillies á la Daisy Duke, so all her heroines are smart, unpretentious women who refuse to be anyone but themselves. Joyce has four published novels as well as several short stories available as Kindle downloads. She writes both adult and YA fiction and is active in her regional chapter of SCBWI. Joyce has lived all her life in beautiful LA (lower Alabama), she’s the mother of three gifted children and a blind Pomeranian named Tilly, and she’s been married for 31 years to the love of her life—a superhero who disguises himself during the day as a high school math teacher and coach.