You are here: Home / Non-fiction / Humor / Truckin’ Up! by Donna Carver 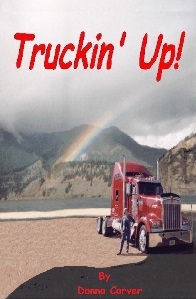 I’ve been a homemaker and mother most of my life. I’ve worked in a variety of professions, including nursing.  In 1994, I married a man who drove a semi-truck, and I got a real education when I crawled into the truck with him. I wrote a funny and interesting book about the trucking industry and the wild trucker’s CB radio slang. , I got the ride of my life in the passenger seat of a ‘sure enough store bought large car’, stylin and profilin’, checking out the ‘seat covers’, shaking the ‘bushes for bears’.

What Inspired You to Write Your Book?
I am an average woman with a good education but when I started riding with my husband in his semi-truck, I learned more in a few short years than I had learned all my life. I was riding in the passenger seat and listening to the CB radio when I realised that what I heard didn’t make sense. The crazy slang that the truckers use was hilarious and I started collecting the words and phrases that I heard. Eventually, I put them together with some stories from the road.

Book Sample
Alligator on the Zipper
We were riding north on Interstate 95 in North Carolina. The sound of the big diesel engine vibrated through my head as I watched the white dashed lines slip by on the dark road ahead. I had been riding as a passenger in this semi-truck for only a few days at that time and it was an exciting new adventure for me. It was so different from what I had imagined. Riding high above the road, I looked down into the cars that we passed. It gave me a whole new perspective on everything. I saw people doing all kinds of crazy things while they were driving. People reading newspapers, writing notes, talking on cell phones, women putting on makeup, and businessmen juggling coffee and biscuits. There were people changing clothes or flossing their teeth while steering with their knees, and even having sex while driving in heavy traffic.
“Break one nine,” the voice on the CB radio broke into the cab of the truck.
Don grabbed the microphone that dangled from a bungee cord attached overhead. ”Come on break,” he said.
“Northbound,” the driver came back, “You got an alligator on the zipper at the 129 yard stick.”
Don grabbed the mike again and said, “Preee-she-a-it, southbound. You’re looking good back to the line.”
Now, I was raised in Florida and it wasn’t too uncommon to hear about alligators roaming around in neighborhoods or on highways, but this was North Carolina and in the middle of winter. “Did he say there was an alligator on a zipper up here?” I asked, somewhat confused.
Don looked over at me and grinned, “It’s not a real alligator. It’s the rubber off of a recapped tire laying on the zipper, which is the white striped line in the middle of the road.”
“Why do they call it an alligator?” I asked.
“Well, if that thing gets caught up under your car or truck, it will chew up everything it hits,” he said.
“Well, where is this alligator?” I asked.
“It’s at the 129 mile marker,” he replied, then pointed to a small road sign on the side of the road that read 120. “You see, most highways have mile markers or yard sticks that measure the distance from beginning to end of the road in each state. They start at 1 at the south and east ends, and run higher as you drive north or west.”
We were headed north which meant that the alligator was nine miles north of us.
I watched the mile markers as we rode pass until I saw 129. Just ahead, straddling the striped line in the middle, of the road laid a large jagged piece of rubber. One end of it curled up in the air, looking very much like an alligator, poised to strike. A few minutes later, we saw a big truck pulled over to the shoulder with his emergency flashers on.
Don took the mike and asked, “You Ok over on the side driver?”
A voice came back. “Yes sir, I just hit that gator back there and it took out my brake line. I got help on the way.”
“10-4.” Don said, as he let the mike go.
“Those alligators are dangerous!” I exclaimed.