You are here: Home / Fiction / Fantasy / Trinity of the Broken by Anthony Galouzis 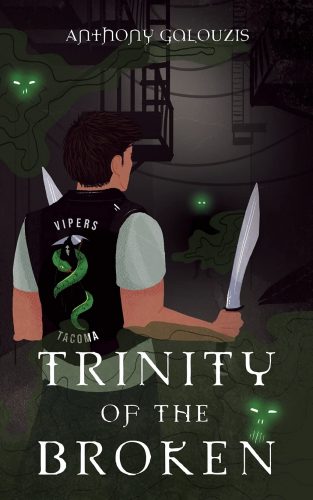 Dante Wright is not one of the good guys. A patch member of the Tacoma Vipers Motor Club, Dante has used his powers and abilities to further his and his club’s wants and endeavors. After a public display of power and a strange attack on his gang, Dante is pulled before the Council and compelled to aid the investigation of illegal magic. What he discovers is much more terrifying and dangerous than anyone could have guessed, and it may just lead to the deaths of him and everyone he cares about.

What Inspired You to Write Your Book?
I recently finished school with a Master's in History. As it would be assumed, there was a lot of writing involved in this process. At the end, I had to write a thesis on a subject of my choosing. It ended up being well over a hundred pages, and at the time, was the longest story I had ever written. It was this accomplishment, matched with the fact that I had been writing almost daily for two years only to suddenly stop, that had me wanting to write about things for fun.

I had always enjoyed fantasy stories, and I had several ideas for different, semi-connected, stories. I began to write a series of short stories that all shared the same world, which I then shared on my blog. It was in the making of these stories that I first wrote about Dante, and he was the first character that I used in more than one story. Once I saw the potential, I knew that I could make Dante's story into a novel.

How Did You Come up With Your Characters?
Dante Wright was inspired by a role-playing character I had made years earlier. I had always liked the idea of a person who was given too much power, and no moral compass. I have often been drawn to the anti-heroes story, a person who does bad or illegal things for the greater good. But, what if that person wasn't good? I wanted to blur the lines between what we consider good and bad. What if a villain did good for the benefit of himself. An anti-villain, if you will. Dante is a bad person. He does illegal and horrendous things for his own benefit. He is selfish, and only cares about the people in his life. Despite this, he finds himself doing incredibly brave things that not only benefit him and his own, but the greater good overall.

Trinity is told in the first person, through Dante. All of the characters, their mannerisms, tone of voice, general demeanor, are all presented with the idea that Dante is describing them. If a character has more detail, or has a richer presence in the story, it is because Dante found that person to be more important than other people he interacted with.

Book Sample
I stood looking out the window. It was bright outside, which was rare for a spring day in Tacoma, Washington. At this time of year, there seemed to be an unending
torrent of rain, or at the least, continuous overcast. The only real benefit to living in the suicide capital of these United States of America is that I’m able to check off Hispanic: white, on any forms or questionnaires that I bother to fill out. It also really helps keep the cops from hitting me with a DWC—Driving While Colored. Of course, give me a few hours in the sun and BOOM, the owner of the dollar store needs to sweep the aisle I happen to be in.

The trees had all their leaves back. That was a relief as I’d been using way too much windshield fluid to get the tree splooge off. There was a decent breeze blowing, but it was of no help to cut the humidity in the house. Even with the lights off, the air was thickand left a layer of sweat on my skin that made me feel like I needed a shower. Don’t get me wrong, I have central air-conditioning and typically the house is maintained at a comfortable sixty-eight degrees, but I’d be damned if I was going to do anything to make that day comfortable.

I suppose an introduction is in order. My name is Dante Wright. Well, that’s the name I go by. It was one of those really stupid things, where I was trying to be all mysterious by keeping my true identity a secret. I’d planned on being nameless, telling everyone a different name each time they asked. I know how stupid that sounds but, to be fair, I was nineteen and, like most nineteen-year-old boys, I was a complete fucking idiot. So, when it was time to put it in the books, I said my name was Dante, and low and behold, my name is Dante. I suppose it could be worse. I could have declared some crazy D&D name and ended up as Soveliss Wyrmbane, which I really need to remember for my next character.

So, yeah, besides my name, I’m a twenty-nine-yearold, single male. My license says I am five foot six, with black hair and brown eyes. My arrest record would say that I have twelve tattoos, though it would not include the large Reaper behind a viper on the inside of my left forearm. I am, from what I am told, of Columbian American descent, which roughly translates to: my dad is Columbian, my mom is white, and they married so he could gain citizenship without all the test taking. Thanks to their pairing, I have been blessed with the genetics of a Latin god, if that god was short and skinny with an intolerance for stupidity. Sad thing is, I don’t even speak Spanish. My dad was always, “We are Americans; we speak English.”

The only other thing about myself that should be mentioned is that I’m what is known as a Geminus. What that means is that I have the ability to use both psionics and magic, a set of abilities that began to develop when I was seventeen. It’s an extremely rare combination, and kind of makes me a big deal. It’s also the reason I was able to put myself in my present situation with Jon.