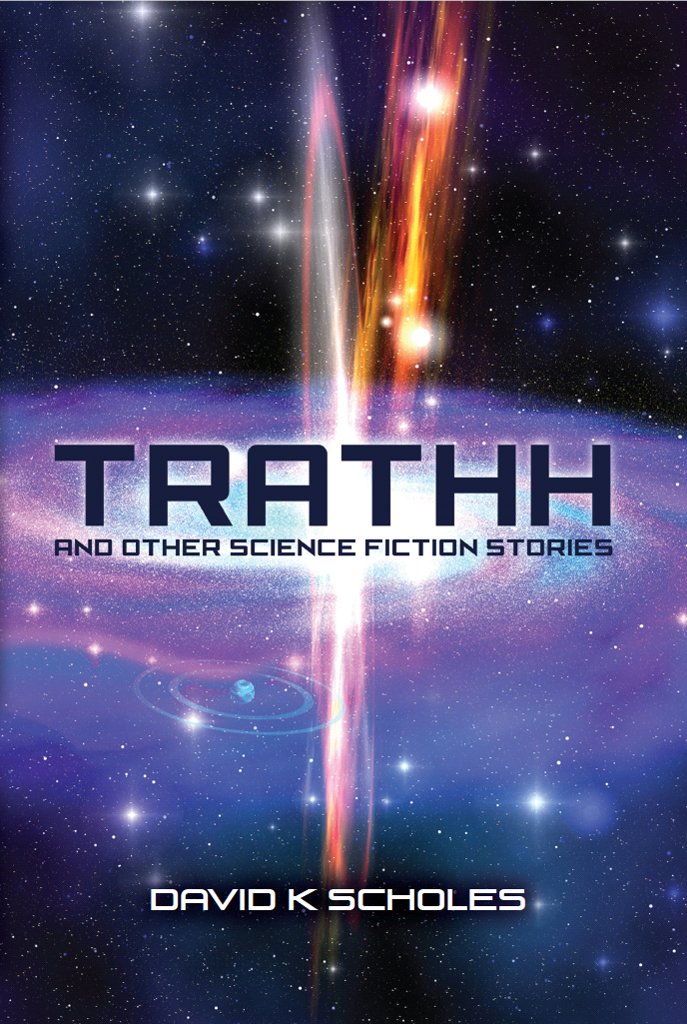 The main story Trathh is based on a story arc pod cast on the Beam Me Up Pod cast site during 2012 and 2013. A powerful alien prisoner, innocent of all charges against him, survives the crash landing of his prison star ship on Earth only to be hunted by the Earth military.

In The Young Old War the ineffectual middles passively tolerate a world wide trend of increasing violence against the elderly by roaming feral youthpaks. In Nerdforce the meetings behind closed doors of a small group of nerds can have consequences beyond our Earth.

In The Streamers, aliens detectable only by their manipulation of human emotions and their ability to stream have our best interests at heart. Or do they? A Multiverse war pitting the gods and mystical powers against the cosmic powers has led to no winners and few survivors, yet somehow life finds a way.

In Treldron an enigmatic alien from an unknowable alternate reality shows that humans don’t have a mortgage on courage and nobility. In Forgotten Soldier, an alien soldier programmed for zero tolerance to crime gets accidentally left on Earth.

What Inspired You to Write Your Book?
A life long interest in speculative fiction and in particular science fiction and science fantasy. I have written two sci-fi novellas but I particularly enjoy writing the short stories. New ideas for short stories always seem to be springing up in my mind and I just love putting pen to paper and bringing these ideas, concepts and characters to life.

How Did You Come up With Your Characters?
My “Young’/Old War” was based on the difficulties I sometimes see between people in their teens and aged persons. Though admittedly this is taken to the nth degree (and somewhat tongue in cheek).

A lot of my characters such as “Trathh” and “Treldron” tend to be uber powerful. I like to write them this way – that is not to say that they don’t have formidable opposition.

At long range the aerial drones monitored the battle between Trathh and the Quellers. In the forbidden zone. These were the latest “hardened” deflector shield protected total stealth hypersonic drones. Fat lot of good it did them. The Quellers destroyed them all. Just as they destroyed the ground based commander less tank drones. Though not before both devices gave the Earth military some insight into the battle.

Battle? Calling it a battle was a bit like calling Stalingrad an altercation. Annihilatory conflagration might have been a more appropriate term.

“Jeeezzzuuus,” said one of the distant drone operators “and this is the guy that we picked a few fights with years ago? Dearest God – what on Earth were we thinking?”

The mighty Trathh fought magnificently and after his victory in the forbidden zone Trathh’s woman – the Earth Mother Aleutia caused the ground beneath the dead Quellers to open and she buried them among millions of tons of rock and earth.

Yet Trathh’s tactic of drawing in as many of the Quellers as possible against himself was only partly successful. It had taken him time to beat them and he had been injured. Elsewhere things had not gone so well and something that Earth had been spared for so long was now slowly but inevitably descending upon it. The curtain of evil that fell on all those who came under the subjugation of Empire.

Though battle plans had long since been laid – the Empire had come with some new weapons and new tactics and Trathh saw that all Earth was in urgent need of his generalship.

The lesser Earth Gods were the first to go down. The crude and ugly process of siphoning off their godpower had already begun.

The Empire’s special units had gone about their business. Bringing down Earth’s internet and other vital communications was only the first of their sinister objectives.

There was one bright note. Trathh, with certain precautions, gave Earth a class of weaponry that the Empire, with its preference for energy weapons, had shunned in times past. Faster than light (ftl) projectile weapons.

Trathh had grinned, remembering his interference in human history all those years ago. How he had steered men to the theoretical underpinnings of ftl travel. The humans had made some good progress and though starship travel was still far away it was not so hard, not really, to help them adapt this technology to a very practical weapons application.

It was true that the Earth military couldn’t do much about the manifold Empire starships millions of miles away. Yet it sure as hell felt good to be able to fire on them with batteries of multiple launch rocket systems and large artillery pieces. To see nuclear tipped weaponry arrive instantly, even if to explode ineffectively, against the hulking many force field layer protected frames of the leviathan starships.

Closer to home though – this “instant fire power” proved more than useful.

The living godstorm created by Earth’s thunder deities to stop the Empire’s troop transporters had run its course. Yet still the Empire’s heavily armed and armored troop transporters continued to arrive. It was the signal to the military of all major nations to use their precious ftl projectile weaponry systems. Which they did with great effect.

Yet there were other, greater concerns.
“The largest and most powerful of the Empire’s starships are starting to move, almost certainly toward Earth orbit,” said Trathh.
“They must feel that the gods are too weak to launch another living godstorm,” replied Aleutia.

Yet as if this wasn’t bad enough, there was another even more disturbing development. Without warning Trathh could no longer sense the presence of Thor Odinson. He knew the Quellers had mounted a massive assault against the dimensional interface between Earth and Asgard but considered this to be the most strongly defended part of the entire defense system.

“The Quellers made the gods of Asgard their primary target,” said Trathh
“You couldn’t have known this,” responded Aleutia sympathetically.

As Trathh approached the Earth/Asgard dimensional interface, he witnessed the horrifying scenes of destruction with Asgardian warriors strewn everywhere. Though there seemed to be almost as many Quellers among the dead.

Then Trathh saw before him an object at the very edge of the dimensional interface. As if it was half in Asgard and half on Earth. It was the greatest single weapon that even he, in all his vast experience, had ever known. No single weapon of the Empire could match it. The hammer of Thor lay on the ground before him. Yet where was the hammer’s owner? Where was the son of Odin?

Even now Trathh hesitated, reluctant to pick up the great weapon, questioning his own right to do so. Not certain sure that he even could lift it.

Quellers, perhaps a dozen or more, equipped with weapons he recognized from his long incarceration began to converge on him.

At the same time an imposing form appeared at the corner of his vision. Yet Trathh saw that it was, for all that, only an image, perhaps an astral projection.
“Take my son’s hammer mighty one, use it well!” and with that the image of the All Father disappeared.

The mighty Trathh went to bend down yet before he could the hammer of Thor, as if alive, flew into his grasp.

He hefted it several times – then held it high as Thor himself would have done and with it Trathh sent a signal to all warring combatants. Briefly and across the length and breadth of the Earth every last one of them stopped what they were doing. Men and gods, Empire star troopers, special units and even the Quellers. Each coming to terms with the realization that, whatever the final outcome of the as yet unresolved conflict, the Universe’s greatest warrior now held its greatest weapon.

For those Quellers moving past the dead Asgardian gods to confront the mighty Trathh – it was a most unsavory precedent. Tasting for the first time in all of their collective existence an emotion normally reserved for lesser beings – fear. Pure, unadulterated fear. To add to the ignominity of the occasion some, then all of them stepped backward away from Trathh. First a single step, then another, then more.

The first time since the Empire had created them that the Quellers had ever taken a backward step – against any enemy.