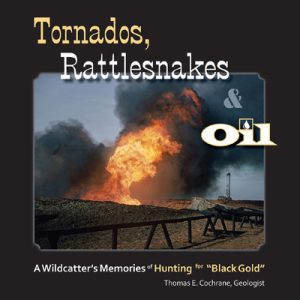 “Black Gold”…OIL…the magic bullet of liquid petroleum not only propels all manner of people-movers globally, it’s also a component of more than 6,000 products—everything from motorcycle helmets, to vitamin capsules, to ink. But who DISCOVERS these critical—and elusive—fossil fuels of oil & gas?

Meet a wildcatter whose back-in-the-day journey from the hills of New York, to the ice fields of Alaska, to the plains of the Midwest brings the reader along on this complex quest to SEE underground. Here’s an insider’s look at the petroleum industry of the latter 20th century—and what geologist Thomas E. Cochrane experienced along the way. From Oklahoma, to Texas, to rubbing elbows with iconic oilman T. Boone Pickens, his personal tales of the oil fields provide a firsthand glimpse into the art as well as the science of exploring and drilling—all in the relentless pursuit of “hitting the big one,” every wildcatter’s dream.

From company man, to making indie deals and partnering on the fly while chasing the next hot prospect, Cochrane discloses the technical processes involved in detail…but also the thrill of the hunt—including what can sometimes go very wrong. From dry holes, to blowouts, to sketchy money men among a cast of other colorful oil patch characters, his story delivers a step-back-in-time look at a bygone era in an ever-evolving global industry…and he has a sage perspective to share on its future as well.

What Inspired You to Write Your Book?
As an octogenarian, I've lived a heck of a life at this point — and much of what I've learned has just crystallized for me in the last couple decades, truth be told. It seemed it might interest folks to have a glimpse of my back-in-the-day wildcatting adventures in the Midwest oil patch of the 1960s/70s — and, perhaps most importantly, to read a warts n' all tale that shows we CAN grow and change over the course of your lives as, having once been a Big Oil "insider," I'm now an avid and very active environmentalist with a much different perspective on our energy future, and have even mended my previously somewhat chauvinistic tendencies. So the book concludes with reflections along these lines as well.

Mostly however it brings the reader along on the quest to SEE underground, and what that complex (and often dangerous) process entailed.

Alcohol-laced good times and dancing too on Saturday nights.

Outside of Oklahoma City, Tulsa, and a few other large towns and cities, Oklahoma is still dry, although it has loosened up in recent years as the suburbs creep further and further from the main cities. However, liquor, wine, and beer can still only be purchased in state
licensed liquor stores.

We moved to Oklahoma in 1964, and the state had just gone wet a handful of years before, in 1959. My neighbors wished it was still dry as their bootleggers got them booze anytime, day or night—and with more selection and cheaper prices than what was offered in the
state-sanctioned liquor stores.

Bars opened in Oklahoma City soon after the state went wet. They were called ‘clubs’ and you had to buy a club card ranging from $10 to $100, depending on their exclusivity. I never bought a club card, but always had access to any club I wanted to drink in. When I
showed up without a club card, they would invite me in as a guest, but never insisted I purchase a card. The next rule emplaced was that you had to have your own bottle at the club—with your name on it. We brought bottles for a short while and then the “clubs”
provided “your bottle” for you with your name on it, and charged you on a per-drink basis. I guess if you didn’t come in for a while, your bottle got another name placed on it. After some time, the labels literally just fell off the bottles and that rule was no longer
enforced.

My children, when they reached 18 (although some earlier, having lied about their age), worked as waiters, bartenders, or in the kitchen of many of these local clubs. Periodically, the ABC Board or the police raided them to see if laws were being broken. As a result, my children have been arrested, handcuffed, and taken off to jail. The club owner was called each time and he always came down and bailed out his employees and paid a fine. After a while, a phone call warned the employees that a raid was coming at 9:00 p.m., and everything was hurriedly put in order. I wonder what the payoff was?

However, the small towns in western Oklahoma were different. There were no clubs, but beer bars with only 3.2% alcohol level beer in many towns (average beer alcohol is 4%–6%). Watonga was one of the spots closest to the wells I was working on, so off to its bars
we went. The My-Oh-My Bar was a favorite and was located in an old hotel. When you sat at the bar next to a cast iron pipe which came down from upstairs, you’d hear swoosh—and you could tell someone had just flushed the toilet. The jukebox was loud and blaring a steady stream of cowboy and western songs. On weekends, there was a small band and lots of fun. People would come dancing off the floor and then quickly return, singing the next
song along with the band. We laughed a lot!

There were always fights in these bars. Someone was messing with someone else’s girlfriend or wife—you wanted to keep your wits about you and not get smacked with a pool cue! The local sheriffs rarely came into the bars and rarely gave out any tickets for speeding. Occasionally they had to arrest somebody—who was invariably one of their neighbors. I don’t remember a lot of auto accidents, but many of us got behind the wheel after a night of drinking who, if tested, were likely to have been legally drunk.

One of the pushers (drill rig superintendent) on a rig we used often was an Indian known as Chief Haigler. He could drink more beer and straight whiskey without getting noticeably drunk than anyone I ever imbibed with. The oil service companies always had a case of hard
liquor in their trunk and readily gave these to their clients. Crown Royal and Johnny Walker Red were their favorites though—not mine. Everyone in the oil patch seemed to drive a dented pickup truck.

No one drank on the rig floors though as they’re dangerous places. I’m sure Chief Haigler and I were inebriated many times when we returned to the rig. We always quit drinking for at least an hour and had breakfast with lots of coffee before returning to the rig.