You are here: Home / Fiction / Fantasy / To Enter The Path by Stephanie Flores 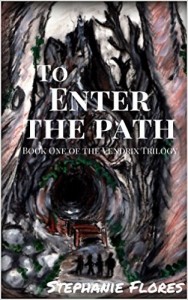 A prophesy has been strummed by a drunken minstrel about a Vendrix finally controlling their greatest power called the Victus Lameit. If someone actually learned to tame this sentient magic that craves carnage, and kills families and strangers alike, it could be used to annihilate the sorcerer that’s been wreaking havoc everywhere.

There’s three things wrong with this notion, though:
1. No one knows who the Vendrix is.
2. To get to the sorcerer you must survive his path which is just one murderous obstacle after another.
3. No one is entirely sure they heard the minstrel’s slurred sayings correctly.

Zendra, a young woman raised by an assassin and anything but dainty, refuses to admit she’s the Vendrix they’re talking about. Despite the fact that she just massacred a horde of wizards with no more exertion of energy than a yawn. Regardless of her denial, she’s enlisted by three men wanting to attempt the Path, for fame, adventure, or vengeance.

Now, Valen, an arrogant yet charming wizard prodigy, Brevle, a wise-cracking warrior, Wulard, owns a map (sorry, that’s all he contributes), and Zendra, still unsure if she’s more of a threat to them than the obstacles, must band together, quiet their pessimism, and will their legs to forge through the Path of Fatality.

What Inspired You to Write Your Book?
I started this book in Middle school as just a hobby. Then it was years of scribbling, typing, leaving it abandoned, rereading it to get inspired, typing a bit more, throwing it in to a fire, repeat. Recently, I finally put my foot down and said, I am going to finish this story–or at least the first book of the trilogy. I found an editor, two awesome beta readers, and here we are!

How Did You Come up With Your Characters?
Each character is a mishmash of attributes from important people in my life. I tried to use events I’d witnessed, read, or heard about and created reactions that I believe are realistic to what was happening. I will admit, that my main heroine does have some of my personality mixed with major creative improvements. A gal can dream, can’t she?

Buy To Enter The Path On Amazon