You are here: Home / Fiction / Historical / To Each What He Deserves by Scott Wiegmann 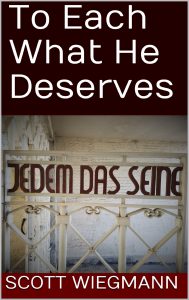 Two fishermen discover the strangled banker’s corpse in the Florida Everglades after he missed his meeting with FBI Special Agent James Elliott. The discovery of the bank officer’s body causes Elliott to begin an intricate investigation that covers three continents and takes the reader on a twisting ride from the final days of World War II Nazi Germany, to South America to Miami. The author weaves a tale of art theft, money laundering and murder to an exciting conclusion.

What Inspired You to Write Your Book?
I was interviewed about the FBI by Author Todd Lewan, a former AP reporter who wrote the novel, "The Last Run". After meeting Todd and seeing the satisfaction he got from writing, I was inspired to do the same.

How Did You Come up With Your Characters?
Most of the characters are based loosely on people that I worked with or arrested over the years. All of the law enforcement officers and lawyers in the book are based on people that I know. Many of them know they are profiled under a fictitious name in the book.

Book Sample
Wagner was ruthless and determined handling the crews. Four times in the past year he pulled his Luger P 08 pistol and shot and killed inmates simply because they didn’t move fast enough to suit him. Many of the prisoners formed resistance groups at Buchenwald. In April, 1944, a Jewish inmate working in one of the armament factories was searched at the end of the day. The prisoner tried to smuggle out a rifle barrel by taping it to his leg underneath his blue and white striped prison uniform. Wagner was called to the factory exit and shown the gun barrel. Wagner had the prisoner removed to the outer courtyard of the factory and instructed guards to assemble the remaining workers to watch. “This Jew tried to steal this gun barrel. This is what will happen to you if you steal”, he yelled to the gathered inmates. While two guards held the prisoner, Wagner crushed his skull and beat him to death with the gun barrel.
The prisoners in resistance groups also carried out acts of sabotage against the Germans. Late in 1944, four resistance group members pilfered gun powder used in making ammunition. They set off the powder in a storeroom at the factory destroying thousands of rounds of ammunition. Wagner questioned the guards assigned to the detail to determine who was responsible, but they were unable to pinpoint the perpetrators. To make sure they did not escape punishment, Wagner issued orders that every prisoner assigned to the detail who had access to the gun powder would receive the same penalty. It took five hours that night, but forty-one prisoners were hanged on the gallows at Buchenwald. On Wagner’s orders, guards made every prisoner in the camp who worked in the armament plant watch the hangings from beginning to end.
For these reasons, Pister knew Wagner was as loyal as any soldier in his command. He picked him for the assignment because he was bright enough to pull it off, and not only was he fluent in French, he was one of few SS stationed at Buchenwald who spoke some English.