You are here: Home / Fiction / To Birmingham Castle (The Comrades of Honor Series #1) by Alicia A. Willis 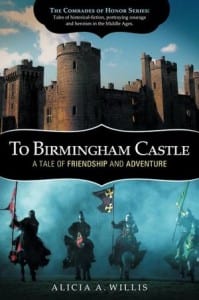 The time is the Middle Ages, a time of clashing arms, valiant knights, and intriguing castles. Join Robert Fitz Hasseltine, a young nobleman of unchallenged character and the heir to his uncle’s vast earldom. Valiant, yet merciful, Robert’s steadfast determination to aid the weak brings him face to face with several individuals who urgently need his protective care–individuals who must throw themselves upon his compassion and rely on his strength to overcome their pasts and lead successful lives.

Yet the days are volatile, and danger lurks on the horizon. There are dangerous enemies who hate Robert’s steadfast character and ever-present mercy–enemies who would do anything to vanquish his compassion and shower their malice upon his cause. A thrilling adventure commences, coupling victory, peril, friendship, and rivalry. During his eventful journey from squire to knight to earl, Robert’s courage is strongly tested and his strength challenged. Will he be able to overcome the enemies that beset him and proclaim himself the undisputed lord of his shire? And, above all, will he abide true to his resolve and prove to be a kind, considerate master?

Join Robert and his steadfast friends, Brandon, Strephon, Nathaniel, and Narcissa, in their long journey of friendship and adventure, and experience the thrilling perils of life at Birmingham Castle!

A novel of adventure, suspense, friendship, and courage, as a young man embarks on a perilous journey to overcome tyranny and reform chivalry in medieval England.”

How is Writing In Your Genre Different from Others?
My dialogue is mainly Middle English. It’s easy to understand, but it gives you the sense of actually being in the Middle Ages. I also include footnotes and a glossary so you can understand the meanings behind certain customs or words. My series is adventurous and character-led, and each installment will generally have you on the edge of your seat. But, at the same time, you learn about medieval customs along the way.

What Advice Would You Give Aspiring Writers?
Don’t give up. Learn everything you can about your genre and craft, and then WRITE. Don’t be intimated by the fear you can never be good enough. You CAN. Just give it time and determination, and do not settle for second best. I worked for my first book for over seven years before it was published. I learned so much and you will too. Keep going!

Author Bio:
Alicia Willis is a home-school graduate and an avid historian. From an early age, she has had the desire to write family-friendly, accurate books about the past. When not writing or doing endless historical research, she enjoys singing, being a church pianist, and teaching music.