You are here: Home / Fiction / Drama / To and Fro Upon the Earth: A Novel by Markus McDowell 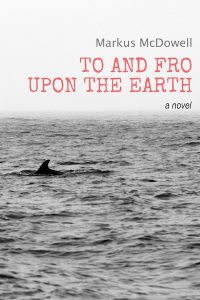 This literary novel is an old-fashioned story of grief and the search for meaning in a world that seems not only uncaring, but vindictive. To and Fro Upon the Earth is a captivating (and disturbing) story about a man who rejects the common answers to life, suffering, and injustice. In his life, in his dreams, and in painful flashbacks, Jay Adam faces the agony of grave injustice, experiences the cold hand of fate, and reluctantly embarks upon a questionable search for meaning and hope.

“In this novel, McDowell expertly drills deep into the core of humanity and exposes a raw nerve—a painful discovery, but not without purpose…it addresses a question we all face at some point in our life: is there any beauty to be found in a dark place?”
(Linda Marie Zupancic, Writer, editor, B.C., Canada)

“…not for the faint of heart…McDowell takes perceived notions and completely shatters them…I believe that this novel is his wake up call to society.”
(Courtney Hancock, Reviewer, Norman Park, GA)

What Inspired You to Write Your Book?
A reading of the ancient book of Job made me think that we are no better at answering the question of meaningless suffering than ancient people. It seemed the best way to explore suffering and injustice was through a character's experiences, dreams, and flashbacks.

How Did You Come up With Your Characters?
I roughly base them upon people I know or know about (acquaintances, family members, famous people, someone I encountered in a store, etc.). I am not depicting those people, rather,  I use those people as a basis for my character, a sort of “type" that fulfills the need in the narrative.

“That’s one small step for man,” I said under my breath as I stepped out of the van and into the light of day.
The other men climbed out behind me, but I paid no attention to them. Two buses sat idling in the broad parking lot, like sleeping monsters gently snoring. The sign on the front of the closest read “San Bernardino-Los Angeles Union.” The other was “Phoenix-Tucson.” Besides the two buses, there were three cars, parked apart across the asphalt expanse, like vehicle outcasts. Afraid to get too close to anyone else.
I took a deep breath of the warm morning air. My plan had been to return home, despite how different it would be. Many of my contacts would still be there. Still alive. But that other emptiness might be more than I could stand.
I heard a female squealing. One of the men was hugging and kissing her. She was not attractive and looked far older than him, though her bawling sounded like a child. The man was delighted. They stopped kissing and began to talk with animation. I watched as she led him to one of the lone cars.
Another who had been with me, a black giant of a man, lumbered over to a pickup truck where an elderly male leaned against the driver door, arms crossed. They shook hands. The larger man opened the passenger door. The truck rocked as he struggled to get in.
It was a bus for me. Phoenix? I had visited a few times on business, but had no real contacts. I knew nothing about Tucson. Maybe I should head out to parts unknown. Really start all over. In every way.
With an attempt at dispassion, I decided that the known was better than the unknown.
I want some order to this puzzle that is my life.
2

“I’m scared.”
Jay laughed. “Of what?”
She shrugged. “It’s such a big house. It’s more than a house. It’s a…mansion.” She whispered the last word. “Did you ever think we would own such a place?”
“No. Not really.”
She stepped close to his side and laid her head on his shoulder.
“Truly? You are such a planner. All those years, you never dreamed of this house, those cars, the success?”
He laughed again. Taking each arm, he turned her toward him.
“Stella, you know me. I plan. I work hard. I don’t dream.”
She leaned in to give him a quick kiss. “True. And you know I loved the house from the start. But it belonged to someone else and was full of their furniture. Now it’s big and empty and ours. A little overwhelming.” She smiled. “But I’m excited. You got the key?”
He pulled it from his pocket and held it up. She feigned a serious expression.
“Are you ready to enter our new home?”
“Yes, yes!” she shouted, giving a little clap. “Let’s!”
“Ok. Since I’m a planner, here’s the plan. It’s now empty. It’s ours. So let’s visit each room, and in turn, we tell each other our ideas for decorating. No debate or discussion right now. On and on, until we have been through them all.”
“Even the closets?”
“Even the closets.”
“The wine pantry?”
“The wine pantry.”
“Then what?”
“Then, we take our time—months if need be—to discuss, decide. This house is the result of many years of hard work and integrity. It should be decorated with care and order.”
She shook her head. “I’m not sure I can be patient! But I’ll try.”
“Good! Everything always works out as it should, anyway, right?”
“Indeed it does, my dear Jay. We are living proof.” She looked at the door. “Let’s do it!“
Jay laughed at her playfulness. It had been a great year. A great ten years.
He turned the key in the lock of the large wood and wrought iron door, and threw it open with a flourish.
3

As I waited for the bus to leave, I thought about the tasks ahead. It was a puzzle, I decided. A puzzle with missing pieces, pieces that do not belong, and no picture of what the completed puzzle should look like. Someone created the game by tossing random pieces into an empty box.
I have money enough for travel, food, and lodging—for a little while. I need to speak with Mr. Munro. He might have some good ideas or contacts for me. Maybe even some work, for a time. But every time I had tried to call, he was out of the office or with a client.
The last time I had spoken with him was over a month ago. I had been ordered over to the central office to take his call—a call I had not expected. As I walked over, wondering what it was about, I had a panic attack. It was too much like my last visit to the central office, nine years earlier. Yet when I had gotten there, it was good news, and he had seemed genuinely happy for me.
Since then, I had tried to call three times. The last time, a week ago, it had not gone well.
Sitting in the bus seat, waiting, I replayed the call in my mind. The office assistant asked me if I wanted him to call me back, and I had to remind her—again—that I could not receive calls. She got testy, and I hung up. As I stood there, holding my little notebook, a man standing nearby—Jon something—asked if I was done with the phone. I told him yes and got up, but he said he had heard I was leaving and wanted to know if I had plans. I had said, “not really.” It’s wasn’t his business.
“You should look up my old boss,” he had said. “He’s always willing to give a guy a chance—takes me on every time I need work. Runs a commercial fishing operation out of San Pedro.”
I told him I had no experience, but he said it didn’t matter. Despite my insistence that I wasn’t interested, he grabbed my notebook and pencil and wrote the name and address. I remember being offended—it wasn’t proper to touch other men’s personal property in there.
Thinking back on that conversation made me snort. If I end up on a fishing boat, it will mean that the puzzle pieces are useless cardboard.