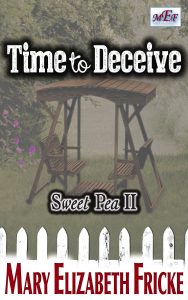 Time to Deceive (Sweet Pea II: 1973-74)
Getting married means you’re going to live happily ever after with your true love. Right? Unfortunately, for Johnie, the first thing she learns after marrying Phil is the necessity of deception as she conceals her love for Jake. Fate continues its cruel intervention when members of Johnie’s family meet untimely deaths and Jake returns to mourn the loss of his sister. Jake and Johnie reunite briefly, painfully, in determination to adopt their four-year-old nephew, B.J. Together, they tackle the on-going vengeance of Phil’s sister, Brenda. Johnie’s dream of happiness becomes a nightmare where Brenda cackles while Johnie boils naked in a cauldron of pea green soup. Because of Marsha’s return and steadfast loyalty, Johnie is able to endure even the most unthinkable.

What Inspired You to Write Your Book?
The entire Sweet Pea Trilogy began back in the 1970's. I cannot tell you how many times it's been rewritten. But, I have sent it to many places/people just asking for advice on how to publish it. Finally, last year, an editor acquaintance read the first chapters of the book and told me to rewrite it in 1st person. The idea was to shorten the story. However, in rewriting, the story became so long I felt compelled to divide it into a trilogy. The first book (published Sept. 3, 2017) The Demise of Innocence (Sweet Pea I)is the primary characters final steps into adulthood. The second story (to be officially released Oct. 7, 2017) Time to Deceive (Sweet Pea II) are the years 1970 thru 1974 when marriage and a major personal upheaval occurs that will make or break the primary character as a person. The third story (to be released in Nov. 2017) The Price of Passion (Sweet Pea III) is set through the 1980's when all those problems from the past come together to be resolved, solved or left in the dust.

How Did You Come up With Your Characters?
I first wrote this book at a time when the described fashions, trends, etc, were current. I deliberately have not changed them over the years in order to retain the authenticity of that time. The entire Sweet Pea Trilogy is set during the time I grew up, married and gave birth to my sons. The setting is in rural Missouri where I have lived all my life. While all of the characters are fiction they do reflect a number of people (personalities of people) I knew then and now. The primary character's general viewpoint and world outlook is much like my own. So, in short, I created a story about a people and a world I know well.
Description of the Sweet Pea Trilogy: To one man she gave her virginity; to another she gave her heart. One, she would mourn. With the other, she would share life's triumph and turmoil. With both, she would endure times of love, and passion and complete happiness as well as times of despair, confusion, and sorrow. One day at a time—each day, building unforgettable memories.