You are here: Home / Fiction / Historical / This Time Tomorrow by Rupert Colley 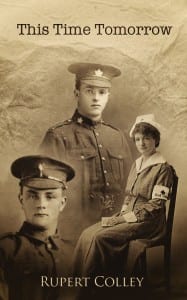 A compelling story of war, brotherly love, passion and betrayal.

Vast in scope and intimate in the portrayal of three lives swept along by circumstances, This Time Tomorrow moves from the drawing rooms of Edwardian London to the trenches of the Western Front and to the uncertainty of post-war Britain.

When Guy Searight volunteers to fight with the British army in the early days of the Great War, he leaves behind his girlfriend, Mary. While away fighting, Guy’s younger brother, Jack, seizes an opportunity to woo Mary for himself.

Forthright and self assured, Guy has always looked out for his confident but frail brother and blithely promises his fretting mother that he’ll look out for him when Jack’s turn comes to join up. But embittered by Jack’s betrayal, Guy vows that when Jack has to face the horrors of war for himself, he won’t be there to look after him.

When the brothers are reunited in the trenches of the Western Front, their thoughts are both with Mary. As Jack buckles under the strain of war, can Guy sustain his anger and allow his brother to suffer alone?

A shocking event, catastrophic in its intensity and barbaric in its conclusion, forces Guy to re-evaluate his relationship with his brother, with Mary and ultimately himself.

This Time Tomorrow is a tale of love, loss and longing.

How is Writing In Your Genre Different from Others?
It’s very emotional stuff. And although much of the novel is set during the war, it is very much a novel about the people, not the event.

What Advice Would You Give Aspiring Writers?
Once written, read your novel aloud. It’s an excellent form of editing!

Author Bio:
I am the founder, editor and writer of the highly successful History In An Hour series of ebooks, published by HarperCollins.

What Inspired You to Write Your Book?
I have always had a deep fascination with the First World War.