Soldiers – most folks know one. A Soldier is always the hero of his own story. I have never heard a Soldier telling story say, ‘Hey, I’m the knucklehead who did….’ This is a collection of stories from the first half of my 25 year career serving with the United States Army. I started out as a PVT in Basic Training in 1989 and will ended up retiring as a Major in 2014. My career spanned four different decades and I have seen the Army “cycle” at least three times. Along the way I ran into thousands of folks. Some good, some not so good. All the stories contained within the confines of this book are at least partly true. By “partly true” I mean the stories are grounded in fact…with a little country boy embellishment added for flavor. The intent of this book is for pure entertainment value. It is not intended to embarrass or humiliate anyone. This is my-story…not history. This book is basically memoirs of my time in the military – stretched a bit (or a lot in some cases). I took the basis of truth and added a little country boy charm. The book is basically fiction as my-story, in my opinion, more interesting that history. 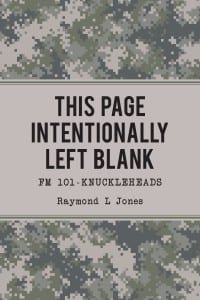 How is Writing In Your Genre Different from Others?
Truthfully, I don’t know how to respond to this question. I’ve never written anything else.

What Advice Would You Give Aspiring Writers?
When in doubt…make them laugh!

Author Bio:
Raymond Jones was born in Landstuhl, Germany. He was raised as an
army brat until his father retired in 1988, after having spent twenty-four
years of active duty in the army. At this point the family moved to their home
of record in Glen Rose, Texas. Raymond enlisted in the Texas Army National
Guard in 1989 while he was a high school junior, attended basic training the
summer between his junior and senior years, then attended advanced individual
training to repair tracked vehicles. In 1995 Ray left the service, went to college
and earned his four year degree in about two years. In 1998 he earned his commission
with the US Army and has served another sixteen years and has plans
on retiring July 2014 after forty-eight months and five tours collectively in Iraq
and Afghanistan. He and his wife Dallice (pronounced “Dallas”) have been
married since 1991 and have two grown children.

What Inspired You to Write Your Book?
I’ve always loved telling stories. I love observing those around me. I love to laugh. So, I put all of these together and put it in a book.