You are here: Home / Bargains and Freebies / Bargain Books Under $3 / Third Blow: A Novel of Suspense (Book Three in the Detectives Daniels and Remalla Series by J. T. Bishop 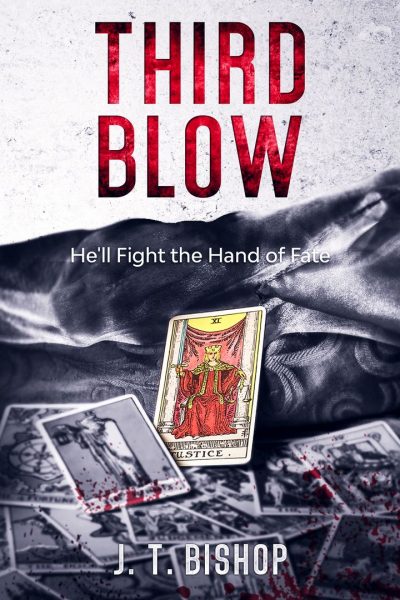 Third Blow: A Novel of Suspense (Book Three in the Detectives Daniels and Remalla Series by J. T. Bishop

Jace Marlon’s best friend is dead, killed by a man as mysterious as Jace’s past.

Forced to trust Detectives Daniels and Remalla, who suggest the motive for the murder is more elusive than the killer, Jace must face a truth he can no longer avoid.

Confronting his troubled youth, Jace has no choice but to ask for help, and finds an unexpected ally in a tarot reader whose assistance could lead to more than friendship and whose readings may provide the link to the secrets he must uncover. But her involvement could risk her life, as well as the lives of the detectives.

With a killer at large, Jace must choose between revenge and answers. And the survival of those he befriends will depend on a quirky woman with chunky jewelry, those he must learn to trust, and the belief in the one thing he never knew existed…family.

Third Blow is book three in the Detectives Daniels and Remalla Series. It can be read alone, but is best read after First Cut and Second Slice.

If you love memorable characters, heart-pounding romance, twists and turns, and losing sleep over a good book, then start this series today!

What Inspired You to Write Your Book?
Third Blow is the third book in the Detectives Daniels and Remalla series. It follows where book two left off, and we begin to learn more about the mysterious man who's killed twice now and who will kill again. Who is he and where does he come from? And how does he have unexplained abilities? More is revealed in Third Blow.

How Did You Come up With Your Characters?
My characters typically show up on their own. My main characters can be inspired by something I watch or read and then I will modify as needed. But secondary characters can emerge as I write, and I let them reveal to me who they are.

Book Sample
Jace awoke with a start, blinking his eyes, trying to focus. Pictures of space and the planets drifted and changed on his monitor and a puddle of drool had collected on the files beneath him. Rubbing his face, he looked around his office and checked the time. Four a.m. He’d fallen asleep at his desk.
The couch against the wall beckoned. He kept a blanket and pillow for nights like these when he didn’t want to go home. Home was too quiet and he would only return here tomorrow. His friends had left the bar around midnight, his girlfriend, Devyn, included.
He spied a water bottle and took a sip, his fingers shaking. The dream still lingered and he took a deep breath, trying to shake it off. He had never been one to have nightmares, but for the last two months, he’d been dreaming the same dream.
He remembered most of it. Two women and a man. The women were running toward him, trying to find Jace. Jace could see them, but couldn’t reach them, no matter how hard he tried. He knew they needed help. A man chased them; his face cloaked but his eyes gleaming. And he smiled. It was more of a leer than a smile, as if the man knew Jace’s torment. The women got closer and Jace was close to reaching them, but the man always got to them first. Screaming, the women fell to the ground, writhing in agony, grasping for help, while the man grinned, and Jace would wake up, breathless and sweating.
He had no idea what it meant. God knows he’d been to enough shrinks in his life that he could probably be one himself, but it didn’t make sense. In the dream, he knew the women. They were important to him, but when he woke, he had no idea who they were or their connection to him.
He took another swig of the water, his heart rate slowing. The dream tonight had changed. The women were running, but this time, Devyn was with them. She’d run to him and he’d grabbed her. But her face twisted into a grimace, and she’d said I’m sorry and she’d been yanked from his grasp, and the man had been there, rising up in Jace’s face and he’d spoken. I did it for you.
Jace exhaled and rubbed his face. The dream faded, but he still heard the man’s voice in his head.
Pushing back from the desk, he put his hands on his knees and debated calling Devyn, but she would kill him if he woke her from her sleep, especially when she had to get up in two hours.
Deciding to shake it off, he stood to get the blanket and pillow, when his cell phone rang. He picked it up from the desk, and eyed the caller id. It was Justin, his best friend. He’d been in the bar earlier playing cards.
Wondering why his friend was calling him at four a.m, he answered, trying not to think the worst, but also feeling an uncomfortable twist in his gut. “Justin? What’s up, brother? You okay?”
There was quiet at first, but then he heard heavy breathing. For a minute, he thought Justin was playing with him when he heard Justin whisper. “Jace.”
That twist in his gut became a sharp spike. “Justin, what’s wrong?”
Justin gulped in air and he sounded terrified. “Jace?” His voice was high pitched, as if he was on the verge of tears.
“Justin?” Jace’s heart rate tripled. “Tell me what’s wrong.”
“I…I…I’m sorry.” He could barely get the words out.
Jace grabbed his jacket and keys, planning to go to Justin’s apartment. “Justin, I’m heading over. Stay put.”
"Please,” said Justin, but distant, like he’d turned from the phone. Was he speaking to someone else?
“Is someone else there? Justin?” Jace left the bar without even locking the door behind him.
Justin’s voice returned. “I’m…so sorry. I didn’t mean…” A sob escaped. “…to hurt you.”
“Justin, what are you talking about?”
Jace threw on his jacket, keeping the phone to his ear, and got on his motorcycle parked in front of the bar.
“I’m coming. Whatever it is, we’ll figure it out.”
Justin sobbed again. “Please, I did what…no…” His voice sounded distant again. “No.” It was almost a wail.
“Justin?” Jace heard a gasp and a gurgle and then the phone went quiet. Jace’s heart stopped and he froze. “Justin? Buddy? Hold on.”
He heard a thud and then a muffled noise, like the phone had been dragged across something. Jace waited and was about to start up the bike when another voice spoke. It was deeper than Justin’s and more guttural, and it whispered. “I did it for you.” Then the line went dead.

For joining the author’s email/newsletter list you will get:
First Book in my first series is free