You are here: Home / Fiction / Fantasy / Theo Paxstone and the Dragon of Adyron by James Turner 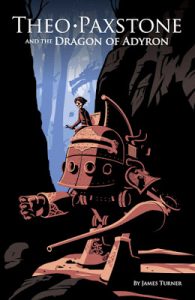 Young Theo Paxstone aspires to a better life. A virtual slave at a steam mech repair shop, he slaves away under the sharp watch of Master Grimes, along with dozens of other orphan boys. The biggest and meanest of them, Grant, has in it for Theo and his best friend, Ollie, the shop’s part spotter bird. Every day is a struggle for survival.
When a dragon attacks the royal tournament and sets it aflame, Theo escapes to help. He saves an elderly steam knight, Sir Bentham, from the blaze, assisted by Bentham’s pugnacious squire, Riley.

Together, they decide to hunt the monstrous dragon down — before it can kill again.

But nothing is as it seems, and Theo soon finds himself caught up in an adventure that will turn his entire world upside down…

THEO PAXSTONE AND THE DRAGON OF ADYRON brings steam punk and medieval myths together, pitting knights in steam powered battle machines against dragons. It’s set in a feudal world mired in injustice and inequality, where even heroes have something to hide.

What Inspired You to Write Your Book?
My nephew. He doesn't read much, at least not novels. I got him into graphic novels, starting with Bone, which was awesome. But I wanted to try and write something that would get young boys reading, when there's so much material out there competing for their attention.

How Did You Come up With Your Characters?
The requirements of the plot dictated some aspects of the characters; the protagonist had to be someone people could identify with. I didn't want to closely base any of them on people I know, but aspects of some filtered in. Some of them are loose composites of both people I know and human archetypes. So the basic archetype (villain, hero, side kick, etcetera) is then shaded and fleshed out by people I have interacted with in my personal life.

Book Sample
There were monsters in the forest.

Captain Cuttles leaned against the battlement and surveyed the leafy green canopy that stretched away into the mist. Fitting, thought Cuttles. The Abandoned Lands were home to all manner of beasts. It was a place of adventure… and terror.

Cuttles sucked contemplatively on his pipe. The hot smoke soothed his nerves. He looked to his left and right, along the undulating stone wall which blocked off the verdant farmland to the south from the abandoned lands northlands. He could see a few guards strolling the length of it, on patrol. They were nonchalant, and Cuttles couldn’t blame them. It was the job of the Cardun garrison to keep the farmers on the south side safe, but the patrols were mostly for show. The barbarian nomads had moved off east, and few beasts ever actually tried to assail The Midwall. Sometimes a horde of displaced claw monkeys would be driven up against it, but that only happened during bad droughts, and at the height of summer. It was spring now, and there was still a sharp chill in the air. Cuttles pulled his fur robe tight over ice-cold armour and listened intently.

A crow cawed in the distance.

Cuttles turned to the nervous man next to him. His name was Jolly Robins. Short and stocky, Jolly had a gut that pushed out the base of his chest plate along with a slovenly aspect. His white beard was so bristly it could’ve been used to clean pots. Jolly had keen senses, tuned to danger, which Cuttles had found useful on the rare occasion when they ventured into the woods to rescue some fool trapper. On the other hand, Jolly often saw and heard things that weren’t there. The man cleared his throat. “Swear it’s true, Cap’n. Big as a boat, it was, and black as night. Wings big as circus tents.” He flung out his arms to emphasize the creatures’ size.

Cuttles chuckled. He sometimes enjoyed listening to Jolly’s imaginative fears. It made the day more interesting. But this time Jolly had pulled Cuttles away from a nice stew and he wanted to get back to it. “Listen. There’s not been a sighting in years in these parts. Plenty of elk up there to eat, anyhow, from what the trappers say. No need to come south for them, we’re not as good a meal. You been sneaking a few nips, Jolly?”

Jolly looked stung. “No, Cap’n, I swear,” he said earnestly. “Sober as a druid. Things not been right since that Sir Drake came through. I told ye it was a bad omen, I did.”

Cuttles rolled his eyes; Jolly was a superstitious provincial, from a farmer’s family. For him, everyone who went through the gate was a bad omen.

Jolly jolted upright and spat out a wad of chewing tobacco. “Ye hear that, sir?”

Cuttles shook his head. It was just as quiet as it had been earlier. “No,” he growled, growing impatient. He’d had enough of this nonsense, and was eager to get back inside, to the hearth and that delicious, spicy beef stew Mary’d brought.

Jolly hefted up his ornate musket and cocked the copper hammer, then leaned into Cuttles, who flinched back. There was alcohol on Jolly’s breath, no question, enough to knock out a moose! Cuttles’s cheeks flushed. The man been drinking after all, and had lied about it to his superior officer. Cuttles opened his mouth to berate the man, but Jolly cut him off with an urgent hiss: “We ought to man the ballista, Cap’n. Get the men out. It’s close, sir. I can hear the soft beat of its wings.”

Something in Jolly’s tone made Cuttles pause. The man was truly afraid. Perhaps a little caution was in order, after all. Cuttles licked his lips and prepared to summon the garrison to arms.

As he did, a great wind washed over him. It snuffed out his pipe and ruffled his fur robe and sent a chill through him. A feeling of overwhelming dread welled up inside him. Cuttles slowly turned. Everything inside him told him not to look, that looking would make it real, but he couldn’t stop himself. He had to know. He gazed over his shoulder and froze, eyes widening in disbelief.

There, hovering just beyond the wall, was now an enormous black dragon. The beast’s metallic scales glistened in the early light. Black flecks buzzed angrily around its mouth and under its huge, sail-like wings. It had eyes the size of dinner plates. A jet of steam shot out of its slavering maw and dissipated into the crisp air. Cuttles noted dragon’s gleaming white, serrated teeth, each as long as a short sword.

The beast began to inhale. Cuttles heard a low rumble as the dragon’s belly expanded. Cracks appeared along it, glowing golden orange between the thick scales.

“Robins,” said Cuttles quietly. “When I say run, you run for all you’re worth.”

Cuttles glanced behind him. The tower door was at least a hundred paces away. But they had to try.

Before Cuttles could take a step, he was engulfed in a searing, sun-hot gush of flame.

Buy Theo Paxstone and the Dragon of Adyron On Amazon