You are here: Home / Fiction / The Zombie Who Would Be King by Barry Davis 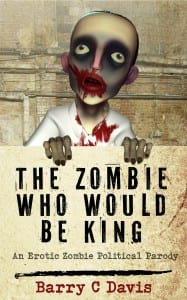 In the novel “The Zombie Who Would Be King,” Congressman Ben Wiley, is your typical urban politician – corrupt, over sexed, on the take – truly a man of his people. In the midst of his campaign for re-election, Wiley dies under unfortunate circumstances. Wiley’s top lieutenants, Elias Turnbull and Chi Bright, stumble upon the perfect solution – continue with the campaign, with a zombie as the candidate. This is a Democrat running for office in Harlem, who cares if he speaks gibberish and has the unfortunate habit of eating people? He should win anyway, right?

Wiley does win and his rudimentary mix of nursery rhymes and sexual innuendo electrifies the political insiders, including the residents of 1600 Pennsylvania Avenue. Soon Wiley is elevated to a cabinet position, HUD Secretary. Unknown to the president, Wiley has now been transformed to a more sentient and capable zombie, one who has developed visions of grandeur. He would like to rule the world, with zombies in command and humans mere food stock.

Wiley amasses power as a Tea Party style budget hawk. While literally cutting heads in government he both transforms the federal government and adds more converts to his undead legion. He pushes aside Biden and suddenly he is running for Vice President, one election and one heartbeat away from the ultimate power.

Elias, shocked to action by the loss of life, works with the resistance to stop the coming end of humanity. Will he be able to stop Wiley or will the human race succumb to the dreams of a dead madman?

“The Zombie Who Would Be King” is a novel of humor and horror with well hidden commentary on race and politics in America.

How is Writing In Your Genre Different from Others?
I write across many genres – crime, mystery, humor, fantasy, horror and historical. I find no differences – they all begin and end with interesting characters placed in extraordinary circumstances.

What Advice Would You Give Aspiring Writers?
Write what you read. If you read historical novels, let that be the genre you initially write. Create a book that you would want to read then write and edit and edit again until it is exactly what you want it to be.

Author Bio:
I love books – reading and writing them. As a child I used to hang out in the library near my west Philadelphia home. One of my brothers would have to stop around to remind me to come home and eat my dinner. My parents – Robert and Lena – loved to read so this affinity came naturally.

I confined my love of books to writing until I reached my late 30’s. Call it a mid-life crisis or what have you but I felt a void in my life. I felt that I had something to say but wasn’t saying it, lost in the day to day grind of earning enough dollars to pay my mortgage and put food on the table. I returned to my first love, words, and began to write.

I began by writing screenplays to enter an online contest held by the HBO reality show called Project Greenlight in the 2002 and 2003. Out of thousands of entries my screenplays finished in the top 100, which impressed me since I was a brand new writer. I then moved on to novels, stupidly believing that getting a novel published would be easy compared to getting a screenplay made into a movie. I can’t say how wrong that was. There’s nothing easy about it.

Eight years later I have completed my sixth novel – THE ZOMBIE WHO WOULD BE KING – adapted from one of my most popular Greenlight screenplays.

If you read my work, you will see that I love many types of books (I obey the axiom that you write what you read). I love historical fiction, crime, mystery, horror and science fiction. My TV is usually set to PBS or whatever baseball game that happens to be playing.

When not writing, working or hanging with my family, I love to ride my bike. There’s no better place to work a kink out in a book than on the back of good road bike.

The boring but vital stuff: I am a University of Pennsylvania graduate who currently lives in suburban Philadelphia with his wife and two children. I have written screen plays, novels and short stories. I have had had several short stories published in webzines and print magazines.

What Inspired You to Write Your Book?
This book was inspired by the incredibly false and malicious attacks against President Obama since he was elected president. The question I asked: What if there was a politician truly as evil as Obama was being portrayed? What would he look like? What would he do?