You are here: Home / Fiction / Fantasy / The Witch Within by Iva Kenaz 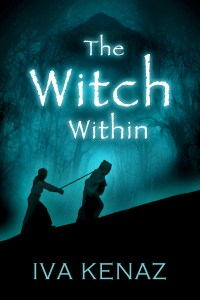 After she has been charged with witchcraft, sixteen-year-old Talitha escapes to the abandoned Cursed Lands and seeks the ancient cave of her ancestors. In the deep woods, she starts to remember her ancestral lore of healing and magical symbolism and receives guidance on how to survive from the local spirits.

But soon she’s captured by two men, who were sent to take her to the local justice. One is a brute, but the other one is fatally attracted to her. After Talitha manages to escape them, she finds her ancestral cave, but also another one at the highest peak of the forest where a group of refugee women have established a camp. By facing both the dark and bright side of her kin, Talitha learns that what she thought was her curse, may yet become her gift.

What Inspired You to Write Your Book?
The Witch Within is based on a series of dreams that I had over a period of time. They at first seemed unrelated, but gradually merged into a story that I felt compelled to write. I was also greatly influenced by a book called The Secret History of the Czech Lands, which describes the fascinating long-lost lore of my ancestors, as well as Bohemian legends and fairy tales. Another significant inspiration flourished from studying Runes and Sacred Geometry.

How Did You Come up With Your Characters?
I felt like Talitha came to me, not the other way around, and her story somehow merged with mine. She starts off as a young innocent girl but grows to be a strong independent woman. She embraces her gifts and who she was born to be throughout the story, slowly turning her curse into a gift. The character for me represents every woman who are seeks her inner freedom and appreciates her individuality.

About the Author:
Iva Kenaz was born in 1984 in Prague, the Czech Republic. Writing has been her greatest passion since childhood and is significantly influenced by esotericism, spirituality and her homeland. She studied Screenwriting at the Film Academy in Prague and Creative Writing at London South Bank University.
In June 2014 she published her first novel, The Witch Within, and has been currently working on a sequel to the book as well as her second novel, My Melancholic Diary, which will be published in November 2014.
For more information please visit her website: www.ivakenaz.com