You are here: Home / Fiction / Science Fiction / The Way of the Dhin by John L. Clemmer 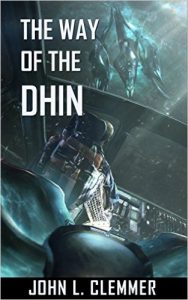 Extraterrestrial beings, the Dhin, have visited Earth. Communication with the enigmatic aliens proves problematic. The Dhin suddenly depart, without explanation, leaving a few samples of their technology. Wide knowledge of these events would cause chaos. The powerful Coalition Security agency strives to maintain secrecy. As Coalition researchers explore the alien technology, their discoveries turn our understanding of physics inside out.

Humanity faces numerous challenges. After multiple economic crises and subsequent collapses, the remaining viable nations joined together as a Coalition. Recent advancements in Artificial Intelligence then led to AI management of most economic and political affairs. Unfortunately, even AI are not perfect, and some volatility and conflict remain.

Not everyone agrees the AIs are aligned with our best interests.

Humanity now faces the seemingly insurmountable challenge of unlocking the secrets of the alien technology without advice or assistance. Questions remain unanswered. Are the Dhin truly benevolent? Will the Coalition military succeed in weaponizing the powerful technology? Will scientists succeed in understanding this new science and leverage it for the benefit of all? What might the AI governors that manage human affairs decide is the best course of action? Could one man, a test pilot, make a difference?

What Inspired You to Write Your Book?
In 2014 I was talking with a friend, discussing some science fiction stories I’d thought up ideas for. I was also watching quite a few cosmology videos on YouTube. I love physics, astronomy, and quantum theory. One of my favorite Science Fiction authors, Iain M. Banks, had died recently, and I noted to my friend that since there weren’t going to be any more works by him, that the genre was going to need “new blood”. So then I mused, “why not write a book myself”?

How Did You Come up With Your Characters?
My long-time friends may recognize some surnames for various characters. I concocted character personalities by thinking along the lines of “what if so-and-so and this other person had a kid? What would they turn out like?” Some characters, since this is science fiction, have personalities that require more “formal” construction. I staged an imaginary interview with hypothetical personalities and worked out how they might behave.

Book Sample
Ethan frowned, staring at the luminous alien controls, hoping to distract himself from the landmarks hurtling by. The perception of speed made worse by the apparent lack of anything resembling a windscreen. It was like riding in a stylized airframe designed by a mad Italian futurist. Digging up the traces of his college physics knowledge, he asked, “Why even change anything except the gravitational constant? Wouldn’t that be enough?”
“Nope, not enough. Well, according to the particle physics team,” replied Jake.
“Yep. I still don’t understand at all.”
“No one does,” said Jake. “Well, except the Dhin, of course.”
“Why haven’t we just asked them?”
“They left.”
“What, and just left this thing here? Before we could get any information out of them about how it worked?”
“Looks like it, and they left several. We’re lucky this isn’t the only one. You have better than a zero-percent chance of doing your job.”
“You’ve got to be kidding. There’s just some super-secret conspiracy to keep the answers away from everyone, no?” Ethan gestured as if slowly closing a large book.
Jake grinned. “Doesn’t seem so. According to the teams that worked with them, it was pretty hard to communicate.”
“They got all the way here from who knows wherever with this and couldn’t manage to talk with us?”
“Yep. Think of it this way, you know what it’s like when you’re trying to teach a dog new commands, or better yet try explaining something to it? Even a smart dog? Well… we’re the dog.” The pilot shrugged, gave Ethan an I-could-have-told-you look, then turned back to carefully inspect the luminous control panel.
“Wow. That had to be exasperating. On both sides. We had our best people there, right? Not just politicians and military brass? Please tell me that’s not how it went down.”
“We didn’t screw that up,” said Jake. “The best and brightest were all there, everyone of ‘em we could get. Every discipline you could think of that would matter. We just didn’t communicate very well at all.”
“So you’re saying the Dhin got frustrated and took off?”
“I guess so. That’s what it seems like to me, but I wasn’t there. Just an opinion.”
Jake spread his hands, palms up, in a broad shrug. He lowered his hands, and then placed his right hand onto a teardrop-shaped backlit indentation to his right. Ethan fought the urge to lean as they swerved sharply, turning South. He felt no inertial effect from the sudden change in direction. He gulped, hoping he wouldn’t find the need for a motion sickness bag. There wasn’t one. Trying to focus on the conversation, he said,
“No way to contact them?”
“Maybe, maybe not. Just like everything in this situation. We’re not sure how.”
The scope of the challenge became broader with every sentence.

Buy The Way of the Dhin On Amazon