You are here: Home / Fiction / Science Fiction / The Warrior’s Eye by A. A. Smith 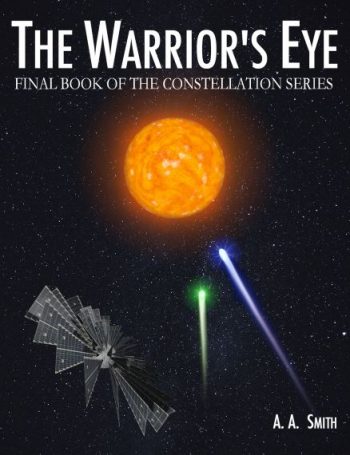 Conrad R. Slade continues his hunt for the ones who killed his lover…

Meanwhile, as the threat of a Jarufani invasion looms, a secret mission to an ancient Jarufani shrine is the only thing that can prevent a full scale war.

What Inspired You to Write Your Book?
For a while, I wanted to tell a military/spy thriller set in space, but I didn't want the conflict between humans and aliens to be over resources or territory. Having the motivation of the Jarufani be religious came naturally after that.
This final instalment of the series is the culmination of many years of hard work and I feel I've grown as a writer during that time. Enjoy!

How Did You Come up With Your Characters?
The characters are loosely based on people I've known or watched on television over the years. They're all various shades of gray.

Book Sample
Alondra Suarez surveyed the room. It looked much as it had when she arrived five days earlier. The pub was nearly full. Three Jarufani men were sitting at the bar nursing their drinks while the cacophony of voices and music filled the room.
Maktoma 4 was a strange little rock. It was located in unclaimed space, within one light-year of Shakarian territory. The Shakarians had a small rhoduim mining operation on the planet for which they frequently used Jarufani workers. After the Shakarian Elders had established formal relations with the UEA, a small number of humans started arriving on the planet. Some to work, some to trade and some to try their luck searching for osmium deposits.
The pub was intended as a Jarufani hangout, but it was not uncommon to see two or three humans in there on any given night, so Suarez didn’t look out of place.
She found her contact sitting alone at a table in the far corner of the room, tail waving slowly like a cat. It always fascinated her that Jarufani females had tails, but males didn’t. The plump Jarufani woman locked eyes with her and nodded.
Tightly gripping the handle of her briefcase, Suarez walked right up to the table. “Did you get it?”
The Jarufani woman looked up with a wry smile. “That depends. Did you bring the product?” Suarez raised her arm, presenting the briefcase. “Then have a seat.”
She sat, placed the briefcase on the table and opened it. As expected, it was full of small green sticks encased in glass cylinders. These were Magic Sticks, a designer drug that Jarufani enjoyed licking.
The Jarufani woman pulled a small scanner out of her handbag and held it next to one of the cylinders. Her eyes widened. Whatever reading she got obviously surprised her. “Excellent quality,” she said. “Where did you get these?”
“Do you want ‘em or not?”
“Alright.” The Jarufani woman slipped her hand into her coat.
“Slowly,” Suarez warned as she reached into her own coat.
“Don’t be so jumpy.” Slowly, she pulled out the folded piece of paper.
Suarez snatched it and unfolded it to reveal a map. She studied it for a moment then slid the briefcase over to the Jarufani woman who grabbed it and put it on the floor.
“You won’t find anything out there.”
Suarez raised an eyebrow. “Why do you say that?”
“That entire area has been explored extensively. Nobody ever found anything of value. I certainly get the better part of this deal. If you don’t mind my saying, you’re a fool.”
Refolding the map and putting it into her coat pocket, Suarez stood. “Time will tell.”

The room Alondra had rented was about as modest as you could get. It contained a bed and not much of anything else. She didn’t like using the common bathroom down the hall, but she didn’t have much of a choice.
She entered her room and sighed as she swung the door shut. She had a busy day ahead of her, so she was looking forward to resting for a few hours before getting on with it.
“Don’t move, Cobra.” The deep voice came from behind her, and she froze. “Keep your hands where I can see them. Boss lady wasn’t happy to hear about Nero Everett.”
“She sent you to bring me in?”
“She sent me to kill you, but I’d rather not do that.”
“Listen. I think I know where they’re keeping those missing scientists, but I still need to confirm a precise location.”
“That’s convenient,” Harimbe said. “You expect me to just let you go?”