You are here: Home / Children and Young Adult Books / The Volcano Dragon by E. L. Botha 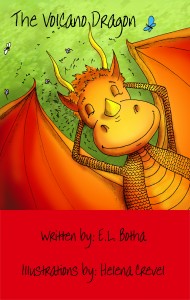 Edgar, a volcano dragon, has lived his whole life with his mother in their volcano. He loves to watch the people in the village below, but has never been allowed to interact with them. But as Edgar grows older, he begins to look at the laughing, playing village children in a new light and longs for a friend.

Will Edgar find a way to make friends or will a disaster make that impossible?

This delightful story of bravery and friendship will be enjoyed by parents and children age 2-100.

What Inspired You to Write Your Book?
My son and I came up with the idea for this book together. About a year ago, we were out to eat with a friend. It had been a long day, the meal was over, and we were waiting for everyone to finish their dessert. So, as four-year-old boys sometimes do, he started causing trouble.

I stopped him and said: tell me a story. I looked at his shirt, which had a dragon on it, and gave him a character. I asked where the dragon lived. He informed me that his dragon, Edgar, lived in a volcano. We both spent the next few minutes adding to the story, and then it was time to leave.

As soon as we got home that evening, I went to my computer and wrote the first draft of The Volcano Dragon.

How Did You Come up With Your Characters?
Edgar was inspired by the dragon on my son’s shirt and his imagination. My son has been obsessed with volcanos for a while now, so it wasn’t too much of a stretch for us to come up with a dragon that lived in one.

Book Sample
Edgar gave his mother a hug and pushed off from the edge of the crater. Thinking of his mother’s words, Edgar suddenly thought of a plan to get the villagers out of harm’s way. He flew straight down the side of the mountain towards the sleeping village. He roared his loudest roar and breathed fire into the sky. He knew the image of a fire-breathing dragon would terrify the villagers, and that was just what he hoped for.

The villagers poured into the streets and ran. He chased them, at a safe distance, until they were out of harm’s way. Within minutes, the volcano erupted, melting the snow at the top and sending a thick mix of water, mud, lava, and volcanic ash pouring through the streets of the village. The villagers looked on with wide eyes. Edgar perched on a boulder nearby and watched.

Buy The Volcano Dragon On Amazon