You are here: Home / Fiction / Action & Adventure / The Turn by Matthew Tysz 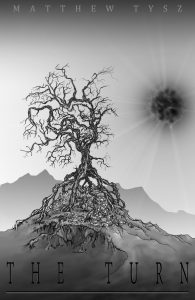 This is the first novel of a series— the only one of the series that has been published at the time of this submission. It is a dark fantasy of approximately 120,000 words. It contains strong language, violence and some sexual dialogue.

Scholar was a man with grand ambitions stifled by a mediocre existence. Quietly, he resented himself for every opportunity he let pass by, living reclusively. One day, he stepped outside and the world had ended; the sky was dark and the ground was covered in ash. The people who survived did not want to talk about what had happened. It was not a bomb, or a war, or even something manmade. But from what Scholar could gather, it wasn’t natural either. It was something malicious, something monstrous. It tortured the world, then destroyed it. The book begins just over two years after this destruction.

The Turn is a dark story. There is no white knight, just complicated people in a complicated world, looking for their place, searching through the mysteries of humanity, and the mysteries of this new existence, seeking out or trying to forget the global atrocity that had vanished as mysteriously as it had come.

What Inspired You to Write Your Book?
I have long been drawn to the idea of freedom with challenges. The post apocalyptic world has proven to be an ample platform for the kind of stories I like to tell. I also strive for new, creative ways to destroy the world; The Turn is my latest attempt to accomplish all of these things while maintaining a dream-like atmosphere and sequence of events.

Book Sample
I'm told the end of the world began when the president of the United States shot himself on national television. Some tell me it started much earlier, when certain foods began to lose their taste. Or earlier still, when missing persons reports spiked, when news online broke of women in different parts of the world committed on hysterical claims that they had been raped by shadows. A lot happened in those days, I hear, before it all came to the turn: so many people running, but not in crowds; everybody ran, but each entirely alone.

Buy The Turn On Amazon