You are here: Home / Fiction / Mystery/Suspense / The Truth and Nothing but Lies by Cheri Vause 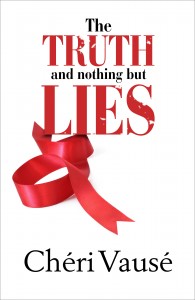 An FBI agent is sent to investigate a series of explosions at Women’s clinics in Washington and Oregon by his Governor father. The case takes many twists and turns as he ferrets through the lies told to him by everyone, but as he follows in the final footsteps of a beautiful woman presumed to be dead, he finds that the truth may be in his own heart. He wonders if it’s possible to fall in love with someone he’s never met.

What Inspired You to Write Your Book?
Serving as a counselor and director of a Crisis Pregnancy Center, I encountered many cases on both sides of the issue. Using these was only natural when I decided to become a writer full-time. I allow the reader to learn both sides and make their own decision, but I tell the unadorned truth without the slogans. If we can’t move beyond trite expressions we will never understand the issue firmly enough to have a valid and informed opinion.

How Did You Come up With Your Characters?
I take a little bit from people I know, and from characters in films and books. I make them uniquely my own by adding their thought processes and reactions to the events within the story. I might take a person who looks like Daniel Craig for instance, and give him a new life with a different accent and profession. But his face might be the key to building a character in my head, like a visual to anchor the traits I create for him.

These characters in my stories are all my friends, even the villains. I believe I have to be friends with every one of them, to have some kind of relationship or they won’t feel real.

Lara hated the forest road, but there was no other way home that wouldn’t add several agonizing hours to their travel time. Home was always too far from everything, except across the forest road of death.

In a few more miles, they would drive past the logging turnoffs and the gas pipe-lines that lay outside the village of Mist. There, the road became even more dangerous, with its railless edge that vanished into the black canyons below, and the forest degenerated into a lightless region of horrors, like a darkling Cronus who had swallowed the light. Her fear of it had become her familiar: squatting toad-like, ready to leap, as they ground their way along the wicked road. She decided to watch for the mist. She loved the ghostly fog that carpeted the forest floor along the Nehalem River, how it would grasp at the ferns, unwilling to let go, or when it floated, apparition-like and would swirl among the trees in a frenzied ballet, although it was the mist that curled down from the sky that she loved the most. She needed the distraction of the nephological quirks, the enchantment of the water sprite who plied her watery tricks on the Oregon stage.

A pain scrambled up her arm when she realized she had gripped the seatbelt so hard she’d cut off the circulation to her hands and turned her knuckles white. She splayed her fingers to feel the tingle of life return, and began to scan the sky for the cool blanket of vapor that would unleash and then disappear as suddenly as it had begun. She lowered her chin to her arm, which rested on the window ledge and relished the damp air as it hit her face.

“Why do you always do that?” David asked, glancing toward her and then back through the endless black maw ahead.

She didn’t feel like talking, but it was obvious that he did. She acquiesced and let her voice roll out like molasses. “I think it’s beautiful,” she said.

The mist, as though on cue, suddenly released from the blackening sky, freckled her face, clung to her eyelashes and the fine hairs on her arm. She watched it curl like a flag in a breeze and then vanish.

“What’s so beautiful about this horrid road?” He belted out a surprised chuckle. “Now you see,” he said. “I used one of your words: horrid.”

She had to jerk her mind back from its reverie. “That is one of my words…” Her voice slid away. It took effort to engage her mind, and she could feel her thoughts shift toward sleep, her eyelids leaden. Their spirited day of sight-seeing at the Portland Zoo bled into the languor of the approaching night. But she had to stay awake for David and for their two small boys, asleep in their car seats, happy in their dreams of trumpeting elephants, purring tigers, and fuzzy panda bears.

She shivered, and drew in her arm from the opened window to brush off the glitter of water. She glanced at David’s scowling face as a branch crunched with a soniferous snap under the tires. The road was littered with debris from the morning rain’s wrestling match with the trees.

“Well…?” He made circles in the air with his hand, an encouragement for her to continue. “What’s so beautiful about it?”

She straightened and closed the window. “Not the road, silly,” she said with difficulty, nearly swallowing the last word. “The mist. I think it’s magical… I love it… My very own Puck.” Her voice dissolved, and she cradled her back against the door to face him, the emerald flecks of her eyes disappearing into the black hole of her iris. Somehow, she had to release the fear without finding refuge in sleep.

“I never thought much about it.”

In the low light of the dashboard, she stared at his gilded outline, at the curve of his arms and his thick, muscular hands clamped tightly around the steering wheel. She loved the way his hair curled around his ears like small eddies in tide pools. As they lay in bed at night, she would finger each one, as though it was an engram of their short life together.

“You’ve never wondered about the mist? Why it does that here and no where else?” she asked.

“No,” he said and started to laugh at her.

“Now, how is that funny?” She crossed her arms and glared at him. He continued to laugh. “I teach my students to have respect for the power of water… Stop laughing at me,” she said with an annoyed tone. “I’m serious.” He tightened his lips in an attempt to stifle his laughter. “You, of all people, should understand its potent force. You grew up here. You’ve known people who were…” She swallowed. “It gives life and it takes it away.” Her voice skittered off.

He turned his face to her with an easy expression. “You think so deeply about things and I don’t. Never have.” He risked taking a good look at her. “I believe you think enough for the both of us.”

“Nature holds us captive to her temper,” she mused, “as well as to her beauty.” She sighed and said, “We need to remember that there’s impermanence to everything around us—”

“It was a good day,” he interrupted, shifting in his seat. “Brian loved the elephants.” The words came out in a blast.

She didn’t mind him changing the course of the discussion this time. She preferred to just drift and watch for the mist to return as the trees raced past her window.

“Davey and I are partial to penguins,” she said finally. “Every time one came near the glass, he would squeal and clap his hands. He was so adorable.” She captured the image and fingered it, the memory so clear.

“Yes, he was.” David reached over and gently placed the back of his hand on her cheek slipping some of her impossible red hair behind her ear. “I love you,” he said softly.

Lara moved his hand to her swollen belly. “She knows your voice.” She closed her eyes; all of her attention was on David’s touch as the baby moved.

“How do you know it’s a she? It could be another boy,” he challenged playfully.

“Who said you could name her Anna?”

“Ah, so you do believe it’s a girl.” Lara circled her finger at him.

“You tripped me up again. You—”

He jerked his hand to the wheel and executed a smooth, but abrupt stop nearly on top of a dead deer, which was stretched across the center of the narrow road.

“You stay here while I move it.” The softness of his features snapped to a rough attention.

“Poor thing,” she said as she leaned forward in her seat and peered out the windshield. She examined the dark, dead creature with tenderness while the windshield wipers threw aside the heavy mist. “I’ll help you move him.”

“Lara!” he called, but she was already out the door and on her way toward the dead creature. Her wild hair glistened in the headlights, a red ribbon taming it into one, long tail down her back. Her five foot five body was dwarfed by the large buck, his antlers like the branches of a dead tree.

David bolted from the car and sprinted toward her. “Remember, you’re pregnant. Let me do it.”

“Good, I have to pee anyway. Your daughter insists on using my bladder as a trampoline.” She disappeared into the darkness beside the road, and placed each foot carefully between the sword ferns and mud. “Dang, I lost my shoe,” she muttered, while she slipped her foot back into the sandal. “It’s stuck.” She yanked it out with difficulty.

A sudden roar ripped through the air as the lights of a fully-loaded logging truck rounded the twist of the road and tore into the station wagon, crushing the car, and shooting toward her husband until he disappeared under the cab.

“David!” she screamed, her voice lost in the horrific din as she bolted toward him.

Something flew at her head and hurled her through the air. She plummeted into the mud by the river. The force of the blow knocked the breath out of her, and knifed a piercing pain through her skull. She felt cold; so cold, as though she were enveloped by ice.

About the Author:
Cheri is a theologian, a photographer, and an author. She is the mother of two sets of twins born on the same day fourteen years apart. Presently, she lives on a small ranch in the heart of Texas with her husband and her dogs, a Coydog named Scully, and a Great Pyrenees named Mulder.