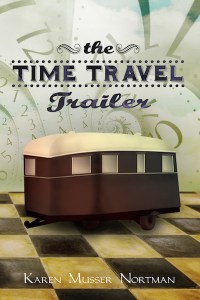 A 1937 vintage camper trailer half hidden in weeds catches Lynne McBriar’s eye when she is visiting an elderly friend Ben. Ben eagerly sells it to her and she just as eagerly embarks on a restoration. But after each remodel, sleeping in the trailer lands Lynne and her daughter Dinah in a previous decade—exciting, yet frightening. Glimpses of their home town and ancestors fifty or sixty years earlier is exciting and also offers some clues to the mystery of Ben’s lost love. But when Dinah makes a trip on her own, separating herself from her mother by decades, Lynne has never known such fear. It is a trip that may upset the future if Lynne and her estranged husband can’t team up to bring their daughter back.

What Inspired You to Write Your Book?
I am not a big sci-fi reader but am fascinated with the idea of time travel. As a former history teacher, I have always wondered what the people in our past were really like. And what if you could witness your grandparents or great-grandparents as they really were in their youth? When I became acquainted the some of the owners of vintage camper trailers who are restoring them, I just thought what a great time portal one of them would be.

How Did You Come up With Your Characters?
The main character needed a reason to buy a vintage camper. So she became a single mom with limited funds and a need to reconnect with a difficult teenage daughter. But I wanted her to have a sense of humor in dealing with her daughter and also be resourceful. And she needed to have strong family ties to her home and mother.

Book Sample
It was a beautiful early spring morning. I looked out to the woods behind the campground and then around the campsite. The trees were bigger than I had realized last night in the dark. As I surveyed the area near the entrance, I was surprised to see that the big motorhome was already gone. Perhaps someone was traveling the nearby interstate and just stopped for the night.
However, a small vintage trailer had pulled into another site near where the motorhome had been. Obviously I had slept very well because I hadn’t heard a thing. I set my mug on the picnic table and decided to visit the shower house.
But as I approached the building, I stopped with a jolt. The building that Dinah and I had used the night before had been cement block and appeared fairly new. The women’s side held two sinks, three toilet stalls, and two shower stalls.
Now, in the same spot, stood two wooden outhouses, one marked ‘Men’s’ and one marked ‘Women’s.’ I stood frozen. Slowly I scanned the entire campground again. I realized the large trees that shaded all of the sites were old elms—I hadn’t ever seen that many in one place in my lifetime.
I reluctantly used the outhouse and when I came out, my head was spinning—whether from the fragrance of the building or the total disorientation I was feeling, I wasn’t sure. I remembered that there were campfires in two campsites at the far end of the campground the night before but only one was occupied now with a canvas tent. I walked slowly around the single road that looped the campground, trying to get my head around this.
I may have been mistaken about the trees in the dark and I suppose people do move in and out of these places in the night according to their circumstances. But nothing explained the outhouses.

About the Author:
Karen Musser Nortman, after previous incarnations as a secondary social studies teacher (22 years) and a test developer (18 years), returned to her childhood dream of writing a novel. The Frannie Shoemaker Campground Mysteries came out of numerous ’round the campfire’ discussions, making up answers to questions raised by the peephole glimpses one gets into the lives of fellow campers. Where did those people disappear to for the last two days? What kinds of bones are in this fire pit? Why is that woman wearing heels to the shower house?

Karen and her husband Butch originally tent camped when their children were young and switched to a travel trailer when sleeping on the ground lost its romantic adventure. They take frequent weekend jaunts with friends to parks in Iowa and surrounding states, plus occasional longer trips. Entertainment on these trips has ranged from geocaching and hiking/biking to barbecue contests, balloon fests, and buck skinners’ rendezvous. Frannie and Larry will no doubt check out some of these options on their future adventures.

Karen has three children and eight grandchildren. She also loves reading, gardening, and knitting, and can recite the 99 counties of Iowa in alphabetical order.