You are here: Home / Fiction / Mystery/Suspense / The Talionis Treatment by Aaron Fernandez 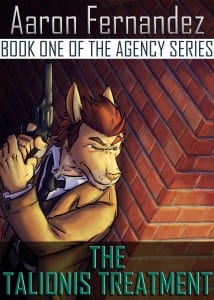 Sergei Dovacefco (dough-va-CHEFF-ko) returns to his childhood home in Pennsylvania to help his father on the road to recovery after some reconstructive surgery, and receives a call from an old acquaintance of his, Dana. Her brother had left for a business trip several days prior, but neither she nor her father have heard from him since, and they suspect he may have been taken, as he was scheduled to meet with investors and specialists regarding a new project in the works.

Along the way, Sergei, who had always worked alone, picks up a partner, Bruno, who serves as both his muscle and a sounding board. They work well together, but the detective, who can usually read just about anyone, isn’t sure what his new ally is hiding.

Even after the case is closed, the abductor’s means and refusal to be beaten threaten the well-being of Sergei and those who’d worked with him throughout the investigation. There’s no rest for the wicked, and if the detective wants to see justice done, rest for him will have to wait.

What Advice Would You Give Aspiring Writers?
However frustrating you may find the process, don’t give up. There is nothing wrong with wanting to make your book the best it can be, and don’t let anyone tell you, “Oh, just finish it already, you can make changes when you’ve reached the end/when someone makes a comment that you need to fix something.”

You are your own worst critic, but that’s not a bad thing; if you can see where a change needs to be made that your beta readers can’t, then go ahead and make the change — if it’s a major one, save your new draft as a copy, should you need to go back.

If I’d saved every revision I made though, it would easily fill a CD.

Author Bio:
Born and raised in California for half my life, then up to Oregon for the other half up to about four years ago, then back to California. I’ve been a bibliophile since the age of two and a numbers nerd for about the same length of time.

My childhood was a happy one; I had what I needed and most of what I wanted and apart from a couple of bumps in the road, my adolescence was a fairly smooth one. The general angst that came with what channeled into some poorly thought out and regrettably pretentious poetry which will NEVER see the light of day.

I currently live with three roommates and a Corgi-Chihuahua cross named Penny.

What Inspired You to Write Your Book?
I’d tried my hand at writing in several different styles, but the mystery genre had never been one I’d explored before. Reading the works of Michael Connelly, Jeffrey Deaver and the like gave me the inclination to try my own hand at crafting a detective story.

Originally, it was going to be a gritty film noir-type story with a Harry Bosch-like protagonist, but I quickly learned that what I had hoped to accomplish, or at least the means by which forward progress was to be made, did not fit within the confines of the time in which I had hoped to set the story.

So, I set it in the future instead, while the protagonist became a more gentlemanly (if snarky) type, who preferred the anachronistic fashions of the early twentieth century.

Link to Book for sale on Smashwords