You are here: Home / Fiction / Horror / The Surgeon’s Son by Catherine @Putsche73 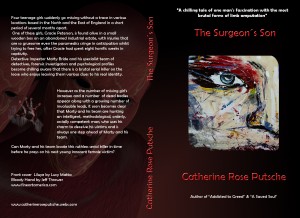 Four teenage girls suddenly go missing without a trace in various locations based in the North and the East of England in a short period of several months apart. One of these girls, Gracie Peterson, is found alive in a small wooden box on an abandoned industrial estate, with injuries that are so gruesome even the paramedics cringe in anticipation whilst trying to free her, after Gracie had spent eight horrific weeks in captivity.

Detective Inspector Marty Bride and his specialist team of detectives, forensic investigators and psychological profilers become chilling aware that there is a brutal serial killer on the loose who enjoys leaving them various clues to his real identity. However as the number of missing girl’s increases and a number dead bodies appear along with a growing number of invaluable leads, it soon becomes clear that Marty and his team are hunting an intelligent, methodological, orderly, socially competent man, who uses his charm to deceive his victims and is always one step ahead of Marty and his team.
Can Marty and his team locate this ruthless serial killer in time before he preys on his next young innocent female victim?

What Inspired You to Write Your Book?
My inspiration to write this book came from a number of recurring dreams I keep having. I thought it would be interesting to mix the two genres – Horror & Thriller.

How Did You Come up With Your Characters?
A number of characters I came up with came from a lot of research and my vivid imagination.

Book Sample
Jessica was terrified after walking and running through the various parts of dark woodland, wondering if she was walking around in circles venturing back to where she started her journey several hours earlier since her escape. The further she ventured in to the forest the light of the moon seemed to fade, creating new shadows and dark patches around her. She wrapped the coat she had stolen from the strange looking house where she was held captive from the large garderobe whilst taking a pair of oversized climbing boots and putting them on her naked cold feet, trying not to make a sound while she unlocked the front door.

The wind wailed between the distorted tree trunks. She could smell the sickly stench of wood rot in the cold air through her nostrils that were running with watery fluid in response to the cold temperature of a mere minus two or three degrees celsius. She was completely naked underneath the thick sheepskin jacket and could no longer feel her legs aware she was losing a lot of blood from her right leg. In fear, she remembered the crazed man who captured her on her way home from cheerleading practise at Calvary High, who then dressed up as some kind of surgeon so he could perform a double leg amputation. She could feel the warm liquid running down both her legs while she urinated in fear that the man was somewhere out here watching her, ready to hunt her down and kill her in cold blood.
She came to a sudden halt listening to sounds of the tree branches creaking, the soughing wind whistling around the tree trunks disturbing the leaves on the ground where she had walked a few minutes ago. The throbbing pain in her right leg wouldn’t give up; it was gradually getting worst each and every step she took. She felt the sudden need to sit down and rest for a few moments to conserve her energy levels, as she was feeling out of breath, exhausted and exceptionally tired physically, but mentally worrying she wouldn’t make it out of these vast dark eerie woods, feeling dehydrated and hungry unable to remember the last time she ate or drank anything. She bent down on to her knees testing the ground below it was a mixture of cold and icy brown dead leaves, fallen tree branches, twigs, and underbrush moss. Laying down, she started to conceal the whole of her body and part of her face with the masses of tree shrubbery, slowly closing her eyes, falling in to a deep unconsciousness.

About the Author:
I was born in the north of England in 1973. I currently live in the beautiful Austrian Lake District teaching English language in college to young and adult learners, where I share my life with my abstract artist husband, and gorgeous rabbits. I graduated in computer software engineering and worked as a systems administrator before I went into teaching.

My mother inspired me from a very young age to write as she wrote a number of successful screen plays that were sometimes aired on the television when I was a child. I drink tea copiously read fiction and autobiographies avidly always seeking new ways to improve my writing style. I am also learning the art of calligraphy writing.