You are here: Home / Fiction / THE SUPREME WARRIOR 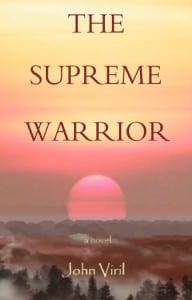 Calidon Dannik’s life is a disaster. First, his Uncle—and sworn master—refuses to allow him to fight in his father’s Tournament. Second, his childhood sweetheart Alynde begins to flirt with Henrick, Cal’s older brother. Finally, Calidon’s father orders Henrick to court Alynde, with the apparent aim of establishing an alliance with Alynde’s father, Baron Dorrin of Helvig.

When Calidon resorts to intrigue to win the woman he loves, he finds himself enmeshed in plots that extend far beyond the confines of his homeland. His adventure takes him from his father’s Barony to the vast dwarf warrens of Nidafall and finally to the fabulous City of Selinger—whose Prince has struggled for decades to bring the warring Barons under his sway. Cal must accept the destructive nature of knighthood before he can help Prince Keldrin thwart the corrupt powers that yearn to dominate Horgeond.

If you like epic fantasy that embroils you in vicious intrigue, takes you to far lands inhabited by strange creatures, and explores big themes like the relationship between war, religion, economics and ecology, then The Supreme Warrior is for you.

John fell in love with fantasy worlds when his sister handed him The Hobbit when he was in seventh grade. After tearing through that book, The Lord of the Rings and then any other “big” fantasy novel or sci-fi series he could lay his hands on, he was hooked.

Reluctant to pursue such an “unrealistic” goal as becoming a writer, John first earned a Biology B.S. at Tulane University, then a J.D. at University of Missouri Kansas City. Rather than growing out of his desire to pursue “unrealistic” goals, he became more adamant about chasing his dreams.

John is a proud Filipino-American, who early in life learned about different worlds through his immigrant father (who came to the United States in 1956) and his Ozarks-raised mother. After dealing with the differences within his own family, figuring out elves and dwarves was a snap.

Today, he is a founding member of an early-stage venture in the health care IT field, and writes in his spare time.