You are here: Home / Bargains and Freebies / Bargain Books Under $3 / The Story of the Cloth by Ken Paterson 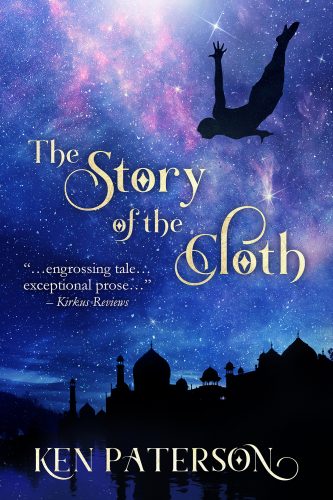 After a mysterious meeting at dusk in London’s Regent’s Park, Alex finds himself in Oman and is drawn, by a chance encounter with the kindly scholar Burhan, into the final, perilous quest for an ancient cloth, allegedly bearing the image of God. An “engrossing tale” told with “exceptional prose” (Kirkus Reviews)

What Inspired You to Write Your Book?
One evening, as I was walking home through Regent’s Park at dusk, I remembered a moment spent in a small square in Cordoba, where I had a vision of Christian, Jewish and Islamic scholars meeting in the shade of the trees a millennium before, during the brief golden age of tolerance in Muslim-occupied Spain. What if this vision had been captured in some way, as a painting, perhaps? Would it have been censored or hidden in the dangerous years to come? Could it still be in existence somewhere, with a message for our present age? My novel, The Story of the Cloth, provided the answers.

How Did You Come up With Your Characters?
The lead character, Alex, is a version of myself: imaginative but shy; occasionally adventurous. Burhan, the scholar that Alex meets, takes after an Egyptian academic who used to work in the university office next to mine. Alex’s girlfriend, Carol, is a combination of an enigmatic friend and a student of mine who smiled but hardly ever spoke, and had a scar on her hand.

Book Sample
"The scene itself was set in a courtyard, with orange and lemon trees and a modest fountain in the centre. On the left stood a tall, bearded man in a robe, clearly engaged in conversation with the men – and a woman – around him, one of his arms outstretched, palm upwards, as if he was weighing the air. I could not tell what their various robes and headwear signified, but there seemed to be no obvious hierarchy amongst them, or if there was, the animation of their conversation had suspended it. My friends and I stood in silence for a moment, marvelling at the lifelike detail. Then Mansour pointed to the bottom right-hand area, which was more in shade than the rest. At first it was difficult to make anything out, other than the trees and a kind of mist at ground level that suggested a hot day to come. But soon we became aware of a figure partly obscured among the leaves and branches, in a light robe and hood. I couldn’t tell if it was a man or woman, but there was something about this person’s posture and presence that held your eyes and then sent you back to the group near the fountain that he or she was watching. A kind of miraculous calm came over the six of us. I don’t know how to explain it, but we all knew that the figure was God."