You are here: Home / Autobiographies, Biographies & Memoirs / The story about Rene by Brian Rienzie Wicklin 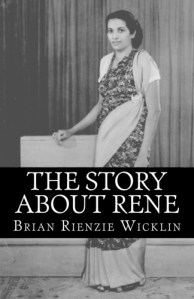 What inspired you to write your memoir?
The idea in writing this book has been to find a part of my life that was missing and that was a problem I had to manage by himself throughout ny adult life. Hopefully, this story will convey to others the need for sharing experiences about challenges and struggles as well as failures in overcoming adversity in family life.
This is my first book. I had been contemplating in writing the story about my mother RENE and her disappearance from our family life. It remained a distant dream in those early years to think about meeting her once again. Despite the odds I met her again in 1960 in England.

About your Book:
This book is about RENE who lived in Kalapaluwawa a village in Sri Lanka, the island country off the southern coast of India that was once known as Ceylon.

Brian Wicklin is the author. He is the next youngest of the 6 children she gave birth to in her marriage with Basil, who was a building engineer in the government services. She settled down to her role as housewife.

The book spells out the emotionally compelling story about his mother and the troublesome life she endured living with her husband, how it all ended in the most unusual of ways, her departure for London not being able to say goodbye to her children and not knowing anyone who was out there to meet her. Against all odds in its favour she met her children one by one as grown-ups 15 to 20 years after her departure.

The idea in writing this book has been to find a part of his life that was missing and that was a problem he had to manage by himself throughout his adult life. This story will hopefully convey to others the need for sharing experiences about challenges and struggles as well as failures in overcoming adversity in family life.

The story that is told starts around the early years of the previous century and ends in the Isle of Wight in 1973.

A very special book and it is well written. It describes wonderfully well the story about Rene and her family life in Sri Lanka in the early years of previous century. How she endured a troublesome marriage and the break up of the family in an extra ordinary way.

Rene was young and school educated and she had gathered social values both at school, church and home. She failed to capture her husband’s attention about social values in living together and upbringing of their 6 children.

When the marriage ended she fled to England without knowing anyone out there to meet her and without giving a hug and saying goodbye to her children.

Against all odds in its favour she met them one by one as grown ups after 5 – 20 years. How did she feel about meeting the children she gave birth to after all those missing years?

How did you decide how to publish your book and where is it published through:
The book is written in English and that makes it impossible to publish in Sweden because of the convention about foreign language book publication: Books in foreign languages have to be published abroad and then to be translated into Swedish and only then imported for sales in Sweden. I had to find a publisher in the English speaking countries. The first edition was published by Edition Dedicates, Canada and the second edition by STATVECA of Sweden under CreateSpace, USA. In this way it was possible for me to get around the problem ttranslation and publication by a Swedish publisher. The book is now available on internet book stores.

How do you see writing a Memoir as different from writing other genres of books?
The thoughts and the paragraphs were easily arranged, the contents in each paragraph was then easy to enter. I had all the facts and knew very well how the disposition could be arranged.

Author Bio:
Brian Wicklin was born in Kalapaluwawa, a township close to Colombo the capitol city of Sri Lanka on 18th April 1939. He was the next youngest of a family of 6 children. His father was a building engineer in the government services and his mother was housewife. They were upper-middle class and held upper middle class values and had links to some of the most powerful families of the time.

He became a Swedish citizen 29th October 1969 and changed his surname WICKREMESINGHE to WICKLIN 30th July 1974.