You are here: Home / Fiction / Mystery/Suspense / The Speakeasy Murders by Patricia M. Muhammad 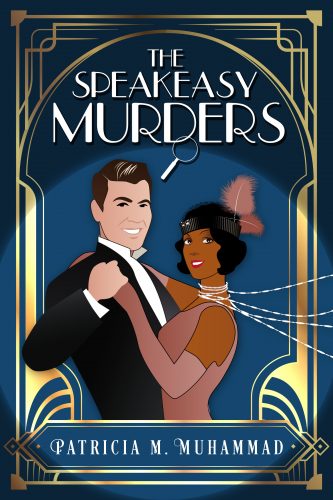 It is the roaring 1920s in the city of Chicago. Helen Williams is an astute, but bashful upper class coloured detective. Helen obtained her position through a recommendation from her father after delaying an opportunity to attend Fisk University. Her mother spoke against Helen accepting the job. Williams assumed it because at the time, a young, refined, coloured woman being a detective was ‘unladylike.’ Her go to instrument is an heirloom magnifier she inherited from her hard working and well educated grandfather. Though some of her co-workers take some time to become accustomed to her quirks, she is admired for her detail, accepted and often called upon her colleagues for her insight. Williams has only heard of one other female coloured detective whom she never met. Helen is called in one night to help investigate some peculiar murders in which a field is often used and she now believes is the criminal mastermind’s dumping ground. After a couple of days of discussing similar cases with her colleagues, Helen concludes that the executioner is a serial killer who also orders the killings. These activities stem from an underground nightclub. A group of criminals throw a brick into the station house to warn the officers to keep their investigations to crimes above ground. Lieutenant Henry Johnson orders the station on lockdown. After he lifts the lockdown, Johnson partners Williams with Patterson undercover to further investigate murders at the speakeasy. Stephen introduces Helen to his sister Ruby to help her undergo her transformation. Williams now appears as a flapper with her station house brother, Stephen accompanying her. She is surrounded by the unfamiliar, jazz music, alcoholic beverages, and the wildest dance crazes. Williams reminds herself to focus on the investigation. One night at the speakeasy, Helen is assaulted and nearly raped by a Negro male in one of the bigger rooms to the left of the main floor. His African male accomplice waits at the threshold of the room’s door to make sure the job is done. She was able to maneuver and defend herself until Stephen nearly pummels him. Thaddeus sees the African man run and trips him, upon impact his skull is split on nails of floorboards. Helen runs out. Thaddeus carries her away and brings her to his flat. She is shy and cautious. The Englishman is protective of her. They increase in natural affection towards one another. The Englishman proposes to Helen and she accepts. One night at the speakeasy, Helen discovers a secret stairwell. It would be the gateway which leads her to solve the murders. Helen and Thaddeus will finally have the peace they earned, and the life destined for them to have–with each other.

CONTENT WARNING: This book is a work of fiction. However, the author intended to create characters and settings historically accurate to the era it takes place in, the racially tumultuous 1920s. Certain terms used as racial descriptions now considered archaic, outdated or even offensive are used to reflect the past usage by both black and white Americans of that era. Particular themes regarding race, references to certain crimes such as murder and sexual assault are included as part of the fictional plot. The author provides this content description for any potential reader who may consider any of these subject matters or references too sensitive to consider.

What Inspired You to Write Your Book?
As far as genre, I wanted to try to write something different, beyond my familiarity. I actually enjoyed it and have already completed my second mystery/detective romance novel.

The setting of the 1920s, mainly how men and women typically dressed had a great impression upon me. Style and elegance was the norm and seem to adorn alot of well to do women, both black and white, naturally.

How Did You Come up With Your Characters?
I usually write from the protagonist perspective, which is mostly female. The setting guided me to the plot but I had to be true to who Helen was. The only female, let alone "coloured" aspiring detective in an office full of men, yet she was still sheltered from the racism that plagued the U.S. during the era. Shy, but intelligent, stern when necessary, but pleasant most of the time. Her office nor her colleagues did not define her. She was her own person regardless of how odd it may appear to be to others.

Book Sample
“The power room, is it?”
“That way,” Helen said. As soon as the guest was far from view, she tried one last time
to push, but in a higher spot. A small gust of air exhaled from the opening. “…and there you
are.” She quickly shut it behind her. Helen now stood at the landing. Williams could barely see what was in front of her until she shook the loose parts of her dress. A few dots of reflective light showed her what she assumed. In front of Williams was a flight of varnished wooden stairs, similar to the color of the speakeasy's door. The detective quickly removed her shoes and tiptoed to the top of the stairs. She realized that the stairway was rarely used as it smelled damp. There was yet another door. She hoped she was right or she and Patterson would have to find a new theory to lead them to the serial killer. Williams then heard two distinct voices. Two women. One was definitively a lot older. She believed one of them to be at least the head of all operations. Williams wanted so badly to open the door, to see the two faces, but she decided that it was too early. The detective then pressed her ear against the wooden door.
“I bet you confused those detectives. They think they can see all,” she heard one woman say. “That brick should have been hint enough.”
“Forget about the brick. What about the note at the dead man's field. They have no idea who our next target is.”
'Dead man's field,' Helen thought. That is what they called the field that they use for a dumping ground after the killings. The voices continued to speak. The detective pressed the side of her head a bit further towards the door, careful to not accidentally push it open.
“Are you sure you wish to go through this? You don't have to do this last one.”
“It's not as if it will truly be our last, just until that lieutenant and his men back away from our business.” Helen placed her hand over her mouth. She wanted for her silent yell to reach the station house and for his men, her brothers in arms to dispose of those two dangerous criminals as soon as possible.
'Lieutenant Johnson…that's whom she's referring to,' Helen thought.
“How soon…”
“You mean the 'she'? I don't know. That young woman can't be here doing that.” Williams believed that it was that same woman who took care of that bum. Maybe if rumour circulated about her, some of the poor whites would burn this place down. 'Or maybe she rose high in the ranks too quickly,' Helen thought. The door accidentally cracked opened by an inch. Williams froze. She then held her breath. Neither of them heard the door as it stood ajar. Helen lowered herself and pushed. She could only see two sets of hands moving around as their private conversation continued. They both appeared rather fair-skinned. Williams quickly deduced that one at least had to have been a mulatto. Most coloureds knew that certain mulattoes had it the easiest when it dealt with getting Negroes to do their bidding, especially a mulatto woman. It was the nuanced need for Negro males, especially of the darker hues to feel legitimized by doing the will of someone who was near white or actually of that American persuasion. They could easily manipulate them and convince them that all that they do was somehow for the betterment of the very people they did not care for. Negroes were the base of their underground coffers. They were no different than the Americans who used coloured entertainers at whites' only nightclubs. The liquor was cheap, and rumour soon spread amongst the Negroes who wished to imbibe that their drinks were beyond low grade, that it was often mixed with shoe polish to cheat the volume.
Nevertheless, Helen now knelt on all fours, positioning her right eye at the opening. She nearly vomited. The detective could not believe what she saw. Helen believed she recognized the face of the serial killer, the one who operated the speakeasy. It was someone she knew. She gasped. The two women stopped speaking. One placed her index finger over her mouth.