You are here: Home / Fiction / Women's Fiction / The Soul Retrieval: A Novel by Ann W. Jarvie 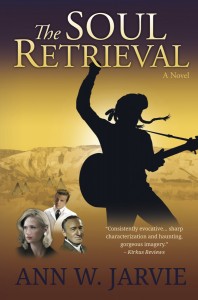 Inspired by a true story, The Soul Retrieval is a suspenseful tale of love, loss and healing which follows traumatized southern beauty Henrietta Clayborn as she moves between her home in a small South Carolina town and the New Mexico Native American reservation whose spontaneous healings keep drawing her physician husband back. Tortured by her awful secrets, Henrietta struggles to thrive in either locale, but it is her unlikely friendship with Joe Loco––an eccentric Native American mystic with an Elvis fetish and a gift for healing––that shows her the way to be whole again.

Set in the late 1950s, The Soul Retrieval is richly woven with spiritual insights but also deadly secrets, forbidden healings, a murder mystery, stunning scenery and an unforgettable cast of characters.

A story of transcendent and inspiring power that is both entertaining and enlightening, readers will be cheering for the uptight woman from South Carolina to push through her fears of the forbidden as she searches for truth and healing, faces great obstacles on the frontier of self and ultimately becomes more than she ever thought possible.

What Inspired You to Write Your Book?
My maternal grandmother, Henrietta, inspired the story. She lived on the Mescalero Indian Reservation with her physician husband until he mysteriously died there in 1919. I am a product of my grandmother’s second marriage, so by the time I became interested in this family mystery, most of those involved had already passed away. My mother was able to tell me a few stories about her mother’s positive relationships with Native Americans, but no one could answer the questions I had about her first husband’s mysterious and premature death. So I decided to make up a story about it. The Soul Retrieval is the result, although I set my novel in the 1950s.

How Did You Come up With Your Characters?
This answer could easily turn into a book! But I will speak about my three main characters. I started out with my heroine, Henrietta, whom I named after my grandmother. Because she’s traumatized, I wanted her to have a confidant, a healer and an unlikely friendship with an Apache mystic I named Joe Loco. Through this friendship, Henrietta would be able to both tell her story and heal. I wanted Joe to be not only spiritually wise, but also amusing and quirky. So I gave him a “crazy” but real Apache name (Loco), an Elvis fetish, a gift for healing and a ’50s fashion-forward sense of style––just for fun. My antagonist, Dr. Colonel, is essentially a composite of every evil man with power and authority I’ve ever encountered. But to make him multi-dimensional, I gave him a softer side, that of being motivated by the love of his son.

Book Sample
Henrietta watched her husband as he left the kitchen, and kept staring long after he had disappeared from the room. When she turned back to Joe, he was giving her that intense look once again.
“It’s just as Bear foretold,” the Apache said. He closed his eyes and moved his hands in small circles with palms out. “The fire’s burning, but no one’s home in your teepee.”
“Excuse me?”
“You don’t feel like yourself, you’re feeling vacant and disconnected, like something’s missing.” Joe spoke as he opened his eyes.
She gaped at him in stunned silence before whispering: “How … why would you say something like that?” Henrietta’s heart thumped in her chest as she nervously glanced toward the living room. Her husband was still talking on the phone.
“Your soul speaks volumes through your eyes.”
“You see something in my eyes?” And she rubbed them again with her handkerchief.
“I see what was there, what should be there, but is not now.”
“Don’t be silly. I’m fine. My eyes were just watering, that’s all.” She winced, knowing that it wasn’t true, hating that she’d become such a liar.
“It’s okay, I’m here to help,” Joe said. He placed his folded hands on the table after sitting down.
His smile and disarming empathy surprised Henrietta, but she wasn’t going to be moved by what seemed like a sweet and insightful gesture. Joe Loco was absolutely the last person in the world she’d choose to confide in.
“Thanks, but there’s really nothing to help with. I’m fine.” She was determined to maintain her fiction, though her stomach tightened and jumped as if trying to digest rocks. Mechanically, she started to reheat some cooked bacon in the fry pan, stirred the grits she’d kept warm and cracked open a few fresh eggs next to the bacon. “Your breakfast will be ready in a few minutes.” She diverted her eyes to avoid his continued scrutiny but could not help stealing a look back at him. What is it with that Indian? Doesn’t he know it’s rude to stare? she thought.
Joe continued to look fixedly at her as he hummed and tapped an accompanying tune on the table. He quieted for a moment without shifting his gaze. “It’s okay, I’m here to help,” he repeated.
No! Henrietta didn’t want to be charmed or disturbed into divulging any sordid details of her past. She had simply wanted to be friendly to this man, and only in a neighborly sort of way because he worked with Jeff at the hospital and was Altie’s husband. But, dadgummit, he is pushing all kinds of buttons!
Still hearing Jeff talking on the phone, she exhaled dramatically and turned to face Joe. Before she could stop herself Henrietta blurted out in a strained whisper: “Okay, I don’t know how you know it, but you’re right. Something awful’s happened to me since our first mission here. And now, I feel like I’m not all here. Something is missing. And I don’t know what.” Oh dear God! What am I doing? What am I saying? She blushed, feeling exposed and vulnerable by her sudden candor. She jerked her hands up and covered her mouth.
“Don’t worry. It’s obvious your soul has fragmented and is in need of repair,” Joe said with a calm certainty, as if it was an everyday matter to be dealt with.
“What?” Henrietta put her hands down and stared into space, bewildered by his words. In the quietude, the sizzle of the frying eggs and bacon filled the room like a choir of rattlers. My soul has what? When she looked again at Joe, planning to demand exactly what he meant, his eyes were closed, and he was whispering and holding his palms up as though in prayer.
So she placed the cooked food on a plate, poured a glass of milk and put both down in front of him. He opened his eyes and smiled up at her.
“That’s one of the strangest things I’ve ever heard—a soul fragmenting,” she said. “How would something like that even be possible?”
“It can happen when we believe or experience something bad we don’t want to face.” He took a bite of eggs and grits, closing his eyes again to savor the combination. “Oh, this is yum-yum,” he said.
When he looked up, it was Henrietta who was staring.
“The good news is that lost soul fragments can be recovered and healed. It’s not hard, if you know how, if you know the secret,” Joe said.
“Are you saying you know how to do that? That you know the secret?”
“The Great Spirit works hitherto and I work.”
She crossed her arms. “So what are you, some kind of soul repairman?”

Buy The Soul Retrieval: A Novel On Amazon