You are here: Home / Fiction / The Son of Perdition 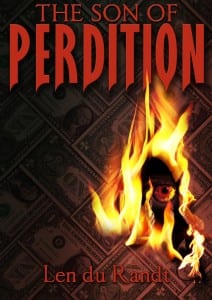 One man will rise from the ashes of chaos to restore order to the world. He will use his supernatural gifts to lead humankind into an era of peace and safety. This man will also usher in a time of terrible sorrows; unlike the world has ever seen before—or will again. His name is Victor Samael Yoshe, the Son of Perdition.

When millions of people vanish in the blink of an eye, Victor steps forward with the answer to everyone’s question: ‘What happened?’

He unites the people of Earth by offering hope and guidance to the scared and confused survivors. Some time later he also secures a peace treaty in the Middle East and is subsequently hailed by all as the long-awaited Messiah.

Everything appears to be perfect, until a terrorist group disrupts the harmony and forces Victor to turn against everyone that stands in the way of peace. Those who do not accept Victor’s mark of protection are regarded as allies of the terrorist faction and punished with the maximum penalty allowed by law: Death.

The Son of Perdition is an end-times novel that dramatizes the rise and rule of the Antichrist. It depicts the last 7 years on Earth before the Second Coming of Jesus Christ as seen through the eyes of the average citizen.

Len du Randt is a 35-year-old husband and father of three. He lives in South Africa and started writing novels as a hobby while working night shifts in Call Centres. To date he has written 3 Novels: “The Son of Perdition”, “The Incubus” and “The Succubus”. He has also written a collection of short stories, and one of them, “Love and a .38” is available for Kindle download on Amazon.com.