You are here: Home / Fiction / The Sibyl Reborn 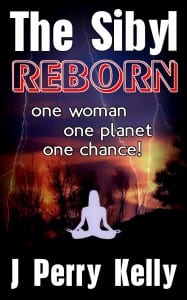 An ancient riddle for a modern crisis

Cursed to be never believed, a princess in a town called Troy once shared the dooms of family and friends, enslavement and violent death, when they laughed at her frantic warnings. In The Sibyl Reborn, she reincarnates to stop global warming only to discover she might be the pawn who seals our fate.

Desperate to make a difference, Cassandra Shavano—newlywed, environmentalist, metaphysical novice—petitions the universe to break the curse and the curse strikes back, baiting her to enter a labyrinth fraught with ambition, seduction, murder, and grief, a gamble whose stakes remain hidden until she’s trapped inside the maze.

Crushed by guilt and stalked by relentless foes, the activist must summon the courage to survive the trap and solve an impossible puzzle, or humanity will suffer the dooms of her former incarnation life after life forever, including her soul mate and unborn daughter.

Twice a surrogate ‘stem cells’ spokesperson for the White House, James ended five years of biotech activism in 2006 when he realized a strategy that had confused and divided Americans over stem cells was being used to discredit climate change. Prior to a 1997 auto accident that left him paralyzed, he enjoyed a twenty-year railroad career, restoring antique furniture, and rambling over back-country roads or forgotten trails from Colorado’s gold rush. Today he lives and writes near at the foot of Pikes Peak with Selene, his wife of twenty-eight years and his inspiration for Cassandra, the sibyl reborn.