You are here: Home / Fiction / The Shopkeeper by James D. Best 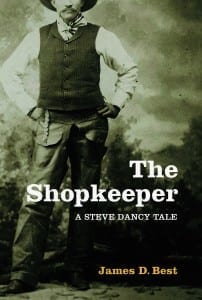 In 1879, Steve Dancy sells his New York shop and ventures west to explore and write a journal about his adventures. Though he’s not looking for trouble, Dancy’s infatuation with another man’s wife soon embroils him in a deadly feud with Sean Washburn, a Nevada silver baron.

Infuriated by the outrages of two hired thugs, the shopkeeper kills both men in an impulsive street fight. Dancy believes this barbarian act has closed the episode. He is wrong. He has interfered with Washburn’s ambitions, and this is something the mining tycoon will not allow. Is a New York City Shopkeeper tough enough to survive in the Wild West?

Pinkertons, hired assassins, and aggrieved bystanders escalate the feud until it pulls in all the moneyed interests and power brokers in Nevada.

James D. Best is the author of The Shopkeeper, Leadville, and Murder at Thumb Butte in the Steve Dancy Western series. His other books include Tempest at Dawn, The Shut Mouth Society, andThe Digital Organization. Tempest at Dawn is a dramatization of the 1787 Constitutional Convention. James has written monthly columns for two magazine and numerous journal articles. He lives with his wife, Diane, in Paradise Valley, Arizona.
You can learn more about James and his books at jamesdbest.blogspot.com