You are here: Home / Fiction / Action & Adventure / The Shekinah Legacy by Gary Lindberg 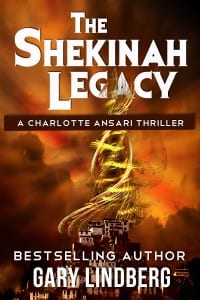 In this controversial Amazon best-selling thriller, international cable TV journalist Charlotte Ansari and her Asperger’s son are caught literally in the crossfire of history when terrorists, the CIA, Mossad and the Vatican all converge in a pulse-pounding search for relics that could forever change the balance of power in the world.

Three decades ago, Charlotte’s mother suddenly vanished with no trace. The mystery was never solved. Then suddenly, on the same day that Charlotte’s home is attacked by terrorists, her son receives an email from the grandmother that he has never known. The coded message catapults Charlotte and her son on a dangerous mission to India and Kashmir to find the only objects that can save the old woman’s life. Unfortunately, Charlotte and her autistic son don’t know what they are looking for.

The Shekinah Legacy is a thriller in the tradition of Dan Brown, Steve Berry and James Rollins. In this provocative novel, author Gary Lindberg uses the form of the thriller to explore the limits and perils of belief.

How is Writing In Your Genre Different from Others?
A thriller by its nature is a bit “over the top,” with tremendous challenges for the hero and a great deal at stake, like the destruction of society. The thriller-writer’s challenge is to make this kind of story exciting yet believable so the reader is drawn into the drama and the actions of the hero.

What Advice Would You Give Aspiring Writers?
Nothing helps a writer more than the very act of writing. Write, write, write!

Author Bio:
Gary Lindberg traveled around the world to research this story. As a writer and film producer/director, he has won over one hundred major national and international awards. He is the co-writer and producer of the Paramount Pictures feature film “That Was Then, This Is Now” starring Emilio Estevez and Morgan Freeman. He lives in Minnesota with his wife, Gloria.

What Inspired You to Write Your Book?
While doing research for a story I cam across facts that intrigued me. These facts, about ancient relics and religious beliefs, led me on a journey that resulted in the thriller “The Shekinah Legacy.”