You are here: Home / Fiction / Historical / The Secrets of Slade Sanders by S.D. Smith 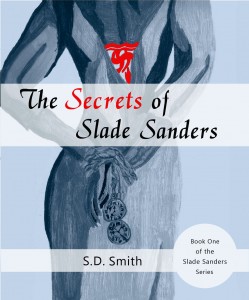 It’s 1910 London, England and Slade Sanders is attempting to embark on a new life for herself by
starting a new business in a society that sees her as a novelty and a second class citizen.
She has three chief problems working against her; she’s a woman, she’s American and she’s black.
Slade, along with her British business partner George, invest everything they have to start a business.
That is the easy part. Maintaining her patience and keeping her growing anxiety in check is turning out
to be much more complicated. Slade begins to feel better when she meets Albert Mitchell. Upper-class,
handsome and with a great pedigree, Albert is the breath of fresh air she didn’t know that she really needed.
The two bond and become inseparable, which results in a new type of attention being drawn to her.
As an American Negro woman, navigating British high society is proving to be difficult. The people she meets
begin asking her questions, questions that she has no answers for. Their inquiries make her feel like
an animal in a zoo, a strange creature to be looked at and examined. Slade slowly begins to realize that
she cannot remember her life before coming to England, a fact that does not go unnoticed by the people around her.
The answers she gives are vague at best. They want details; about her past and her family, none of which she can recall. Slade is compelled to get to the bottom of all of it, so she can have the happy life she so deeply desires.

The Secrets of Slade Sanders is a twisty novel that unfolds slowly to reveal a greater mystery.

What Inspired You to Write Your Book?
My imagination inspired me to write this book. I think I have a good story to share with people. I spend my boring hours during the day telling myself stories for entertainment and to pass the time. Also, I read 50 Shades of Grey and I thought, “I can write better than this”, so I did.

How Did You Come up With Your Characters?
I structure them to fit the story I am writing. They are inspired by other characters from other things. I watch a lot of documentaries and it’s amazing what you can come up with from documentaries. I do full character profiles for all of my characters but those are fluid. I add to them and subtract from them as needed to fit the story. Character profiles are just a suggestion.

Book Sample
It seemed to take an eternity to get to Richmond and then even longer to finally reach her burning house.
She was practically petrified with the news but luckily, Mrs. Bard was not. Her maid quickly got her dressed,
into someone’s automobile and they headed out. She was upset but tried to prepare herself for the worse;
her soon-to-be home in ruins with nothing but ashes for her to claim.
The sun had not come up yet but it soon would. The horizon off in the east was turning purple. She could see it
clearly in the cloudless sky. It was difficult to see the outline of the manor against the dark but she could
still make it out. The building was still there and she did not see any flames or smoke. When the car came to a
stop in front of the house she threw open the door herself and exited. Mrs. Bard followed her closely. Once out in
the open air she did catch an odor of something burning. She confronted Mrs. Bard.
“Where is the fire?” she screeched. The stress was getting to her. Startled, Mrs. Bard quietly answers, “the ballroom ma’am.”
She didn’t try to go through the manor; instead she made her way around the building, through the overgrown, neglected gardens and groves.
The gallery was on the southern side of the house. The gallery was supposed to be used for social occasions and was the most recent
addition to the manor. Once she made it through the gardens, she could see it. Her house was on fire.
She had not bothered to wait for Mrs. Bard. She could hear footsteps behind her but did not concern herself to look.
She could not look. She could not take her eyes off of her burning house. She could see the smoke now. There was certain heat in the air.
It was October but the sudden warmth was apparent. Her home is burning and there is nothing she can do.
It was almost dawn but even so, it would take too long for the nearest fire brigade to arrive. The fire would spread
further and further. The entire manor wouldn’t be raised to the ground but most of it would.
She felt the ground beneath her knees. She could see flames now, peeking out from the other side of the gallery.
In her misery, she didn’t notice the tiny spatter on top of her head. Another one followed after that, then another and another.
Seconds later she was drenched. The rain came down like a sheet of pure liquid. She looked up and it was difficult to
see but there were clouds, clouds that were not there when she arrived. The rain was relentless. It was not pouring
straight down but at an angle, a steep angle. The rain slammed into the manor. It slammed into everything. It soaked everything.
After a long minute, she couldn’t see the flames anymore.
“Ma,am,” she heard Mrs. Bard’s voice before she felt someone grab at her shoulders. She looked up into Mrs. Bard’s face.
The sun was coming up. The sky had turned to a shade of orange. Dawn was here. Against the small amount of light, she could swear
she saw the birthmark on her maid’s face change. It was so slight. If she had blinked she would have missed it. Mrs. Bard yanked her to her feet.
“Ma’am, we have to get out of this rain.” Mrs. Bard pulled her along through the garden and groves, never once did she let go.
They were arm and arm until they were safely inside the manor. They both collapsed just inside the door, wet and exhausted.
She leaned back against the door. Mrs. Bard sat in front of her on the floor. She had to sit on the floor. There was still no
furniture to speak of. A puddle formed around them from the rain water that was simply running off of them.
She rose from the floor and slowly made her way to the center of the room. She could hear the water. Not the rain outside but
the dripping inside the house. The roof had not been attended to yet. It was not watertight. Tonight would add to the existing
water damage that was prevalent throughout the manor. Which is worse, water damage or fire damage?
She turned to speak to Mrs. Bard. Her maid remained where she was, not moving. Slowly and deliberately, she walked over to her.
“Mrs. Bard?”
The older woman still did not move. She put her hand on the woman’s shoulder and knelt down next to her.
“Mrs. Bard? Are you all right?”
“The rain has stopped ma’am. You can go outside.”
Her voice was a whisper and she still did not move. She stood up and moved to the door. With her hand on the knob, she turned back.
“Aren’t you coming with me?”
“No ma’am, I will stay here and rest a little.”
She decided it was wise not to question her further. So, without another word, she turned the knob and yanked the door open.
She stepped out into a perfectly peaceful dawn sky. The sun was just above the horizon and everything was bathed in a warm golden light.
She looked up and amazingly, the sky was clear, blue in the east with a receding violet in the west. The clouds were gone.
There was no trace of them across the sky.

Buy The Secrets of Slade Sanders On Amazon