You are here: Home / Fiction / The Revenge Game by Cole Bosher 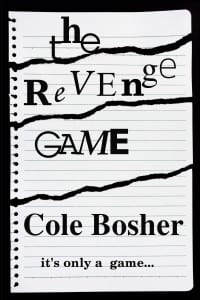 Wes, Brandon, Corey, and Greg have everything: Money, privilege, and unlimited opportunity. As they prepare to graduate from high school and head off to Cape Cod for a much needed break, their lives are turned upside down.

One by one, the secrets they’ve been keeping from each other come back to haunt them. From blackmail, leaked sex tapes, and mysterious packages, can the guys keep it together before their world explodes? But things only get worse when one of them goes missing and everything risks being exposed once and for all..

What Advice Would You Give Aspiring Writers?
Keep writing!
You should write for at least ten minutes every day. You don’t have to show it to anyone, but like playing tennis or swimming, the more you practice, the better you’ll become. In a few months, you may be able to write three chapters a day with ease!
People always say to “write what you know”, but I think you should write what thrills you, too. If you are in love with surfers and their love lives, then write it. Be the expert in it! I’m sure JK Rowling didn’t know a lot about wizards before she began HARRY POTTER, but now she has a lock on that genre.
Lastly, be true to your craft and it will be true to you!

Author Bio:
Cole Bosher (1980-) grew up on the East Coast. After graduating from a small private college with a BFA in writing, he travelled the world and played tennis as often as possible. An avid amateur tennis player, THE REVENGE GAME (published by The Nassau Street Group, Ltd.) was Cole’s first novel. DECEIT is the second book in THE REVENGE GAME trilogy. The final book in the trilogy will be published in late-2013.