You are here: Home / Fiction / Action & Adventure / The Return by Carter Vance @Carter_Vance 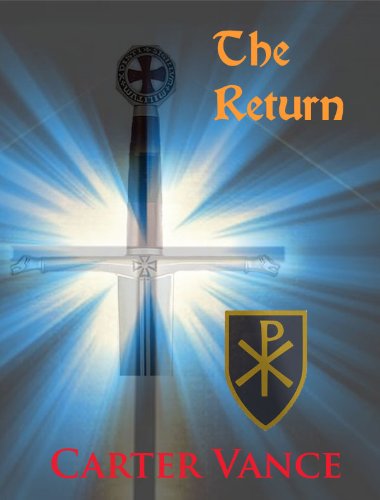 The Return is an action thriller that challenges us with the possibility that Jesus Christ is returning now. “The world currently in a state of upheaval and getting more chaotic everyday,” states Carter Vance, author of The Return. “Many of the prophesized signs of the end times are here, now, and are an indication of the possible return of Christ.”

What if the Knights Templar never disbanded and have amassed, over the centuries, virtually unlimited resources in anticipation of His return?

Aided by the manpower and financial, technological, and military resources of the Knights Templar, the parents and their unborn son face challenges from the most evil of the dark forces in society.

“The grail will be found in the thistles, but it’s not there./If you break it, victory is yours./Else, you battle the first son for 27 revolutions for the prize of a thousand years.”

Their nemesis races to solve this riddle for the prize, but where the answer lies is a mystery to him and his minions. Always aware and on the move, the First Family never rests until the ultimate battle is waged with fleets of the most advanced vehicles and armaments known to man. Who will be left when the battle ends and who will know it ever happened?

What Inspired You to Write Your Book?
The ever increasing chaos in the world got me to thinking “What if these really are the End Times?”
Many of the prophesized signs of the end times are here, now, and are an indication of the possible imminent return of Christ.
What if Jesus Christ is really returning now? How might it happen?

How Did You Come up With Your Characters?
Inspiration and imagination

Author Bio:
Carter Vance is a financial executive who has extensive knowledge of prophecies, religions, relics, and the esoteric.
Drawing from actual rare, ancient, secret prophetic records in his possession, and the work of his staff astrologer, Carter has written the Second Coming Series which is a spellbinding account of how the prophecies may be fulfilled in the return of Christ to our modern day world.