You are here: Home / Fiction / Humor (Fiction) / The Reluctant Millionaire by Joseph Birchall 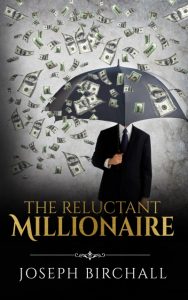 Michael Irvine is thirty-three-years-old, drives a twelve-year-old car and lives with his parents. His job bores him and his love is unrequited. Very few people pay attention to Michael, and that suits him fine.
Then one day, he finds himself the winner of the largest lottery in the history of Ireland – €190,000,000.
Under the weight of his new found wealth and fame, Michael’s life spirals out of control until he is forced to make a decision.
A decision that will capture the imagination of the entire world…

What Inspired You to Write Your Book?
I loved the idea of a shy and introverted man winning the largest lottery win ever. Michael Irvine is someone who actually would rather not win any money. A man who would rather be just left alone.
So imagine that man suddenly being given €190,000,000!
Winning the lottery is something we've all fantasied about. Except the person who's actually just won it!
My book is about that person.

How Did You Come up With Your Characters?
I see a lot of myself in the main character, as I suppose most writers do.
I'm not so shy though!
The rest of the cast are made up from bits and pieces of many people I've met over the years.
The parents in The Reluctant Millionaire are most similar to my own, I have to admit.

Buy The Reluctant Millionaire On Amazon