You are here: Home / The Reindeer Keeper by Barbara Briggs Ward 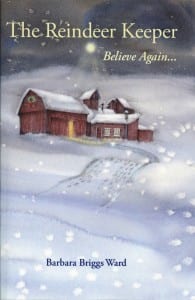 Abbey senses something special about the little man tending to the reindeer who, along with a century-old farmhouse, a barn full of animals, and fields abounding in woods and pasture, was a gift to Abbey from a stranger. Abbey and her husband, Steve, move in just before the holidays. They have been together since the ’60s, eloping when Steve returned from Vietnam. Now with Abbey’s cancer in remission, they’re looking forward to their boys coming home for Christmas.
Turns out this Christmas proves to be more magical than anticipated as Abbey realizes an understanding never thought possible through the rekindling of a belief rooted in childhood. Of course it’s who delivers this gift on Christmas Eve that gives Abbey and Steve the strength to face their greatest challenge.

Author Bio:
Barbara Briggs Ward is the author/illustrator of The Really, Really Hairy Flight of Snarly Sally and Snarly Sally’s Garden of ABCs. Her projects include illustrating And Then There Was Hope and The Brain Reigns for the New York State Office of Mental Health. She has been a featured author/illustrator on Mountain Lake PBS in Plattsburgh, New York, and Target’s Book Festival in Boston and New York City. She has been published in Highlights for Children, McCall’s, and the Crafts Report. An essay led to a feature in Ladies’ Home Journal. Her story, “In Anticipation of Doll Beds,” was accepted into the Chicken Soup of the Soul book, Christmas Magic, released October, 2010.
Suzanne Langelier-Lebeda is an award-winning graphic designer/illustrator. She earned national awards for art and publication design as a coordinator of publications at the State University of Potsdam. Her projects have included illustrations for the National Park Service Cumberland Island National Seashore Visitors Center, Georgia; Renee Fleming Benefit Concert Materials, New York City; Adirondack Life and Country Living Gardener Magazines; St. Lawrence University; Clarkson University; and graphic design for the permanent exhibit on History and Traditions at SUNY Potsdam. She is a member of the Adirondack Artists’ Guild in Saranac Lake, New York. In her fine artwork she primarily concentrates on contemplative nature studies that explore intimations in nature by integrating watercolor, drawing, writing, and digital photography.