You are here: Home / Fiction / Science Fiction / The Rebirth Future of Destruction by Adam Watt 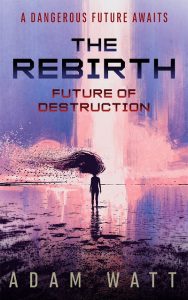 Do you enjoy reading great science fiction, with a dash of horror?
Then get ready for a creepy, apocalyptic ride!

A dark and frightening future lies ahead of Psychic Investigator Azral Nemia, as she can see a catastrophic alien invasion looming in her future. She fears that these creatures will wipe out humanity.

But she has more immediate concerns as a supernatural serial killer is on the prowl, salivating to eat its next victim. With a turbulent future approaching, she will need to find the courage to challenge fate to survive…

“That was the best!” -Darren Hegewald
“Mesmerizing!”

The Rebirth Future of Destruction is part of a series named The Rebirth Shades of Apocalypse. The Series of books are science fiction thrillers about an apocalyptic war between humanity and the Tao’Vak race of evil, murderous aliens who have taken captive and killed nearly all of humankind.
A courageous leader named Tod emerges from the ashes of his hometown of Boise, Idaho but after the Tao’Vak killed his friends and took his world from him, he vows to get revenge and take his world back from the brink of destruction to become the savior that humanity needs.

With so many tales of courage and persistence in this non-stop, page-turning saga, you will be on the edge of your seat while witnessing the end of the world. The beginning of your new favorite series awaits you!

What Inspired You to Write Your Book?
I found inspiration from things I saw, felt, experienced, and from the faith and support of my family and friends I found the courage to step out of the shadows and into the light of my passion.

Life teaches us many things. It allows us to explore our magnificent world, to live; To be. To find our true calling, and to be the best we can be. To look to the future, and take pleasure in the present.

To learn from our mistakes; To grow. To find inspiration. To inspire others. To be Human. To Be.

How Did You Come up With Your Characters?
I looked to my friends and my family. Who are they? What do they do? What makes them tick? What would happen if they couldn't eat fudge for three months? What attributes and personalities can I infuse into my characters? Then I look to pop culture for ideas into what my characters could do, or say in any given situation. What would Joey say when he found a girlfriend? What does Marty McFly do when he goes on his temporal excursions? You can make up new, original characters by assimilating different aspects of people and then developing a story behind them. Flesh them out and watch them soar.

Book Sample
Flame flowed through the streets of LA like a tidal surge. People scream in terror as their lives burn away. An alien spaceship soared through the sky as it blasted apocalyptic fire down onto the city. More screaming; more cries of agony. A strange creature the size of a husky appeared on the Hollywood Hills sign, its ant-like mandibles filled with razor-sharp spikes, chattering at a woman. The creature's blue insect body quivered in anticipation of a quick meal.
Its long front legs had sharp membranes in between its wrists and shoulders, and three sharp talons on its fingers. The alien curved its spine, preparing to pounce on this woman. As the girl screamed, the creature leaped off the hill and landed on the woman's chest and started tearing her flesh. The woman screamed, and then there was only silence. This Eviscerator severed her head and feasted on the flesh. The monster looked in my direction; fear engulfed me as I waited to die.

Buy The Rebirth Future of Destruction On Amazon