You are here: Home / Children and Young Adult Books / The Real Me by Ann Herrick 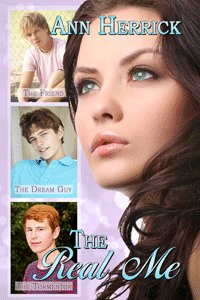 When Mattie has issues with her weight, she decides to take charge of her life, redo her image, find confidence and maybe even dare to talk to guys. Will a change in lifestyle, a friend, a tormentor, and a dream guy help Mattie discover her real self and find romance along the way?

What Inspired You to Write Your Book?
So many girls struggle with weight issues and body image, and often try to solve what they see as a problem in ways that are not totally healthy. I wanted to show a girl who takes on the problem in a positive manner and who also learns that others might see her in a different, even better, light than she sees herself.

How Did You Come up With Your Characters?
I’m always observing other people and I take bits and pieces of them to use in my characters, plus, of course, a lot of my own imagination.