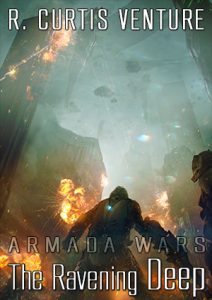 ‘The Ravening Deep’ is the third of five books in the current Armada Wars story. With its signature realism and heart-pounding action sequences, this episode takes the characters established in the first two books and throws them head-first into a war which could devastate humanity.

‘The Ravening Deep’ follows on directly from ‘Steal from the Devil’ and ‘List of the Dead’, also available in paperback and on the Kindle platform. It is now also available for the first time as part of a 3-novel value omnibus edition for Kindle.

What Inspired You to Write Your Book?
This book was ordained from the very beginning, since ‘Steal from the Devil’ was the first book in what was planned as a five-book story. ‘The Ravening Deep’ is the characters’ (and the readers’) slide into realisation that they are up against incredible odds, so it was very fun to write.

How Did You Come up With Your Characters?
The majority of the characters already existed in the previous two books. One character who was introduced in ‘The Ravening Deep’ was a Viskr; an alien from a race formerly at war with humanity. His appearance was already decided in the previous volume, but the speech and thought patterns, decision-making, misbehaviour, and combat style were all created specifically for him. They were drawn from various sources, and some invented entirely, but they all had to obey certain social rules which have been laid down already for his species.

Buy The Ravening Deep On Amazon