You are here: Home / *Reading Room / Buyer's Guides / The Princelings of the East: Books 4-6 by Jemima Pett 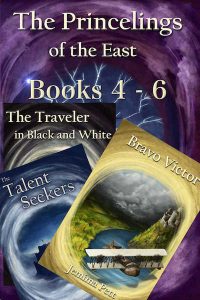 The Princelings of the East: Books 4-6 by Jemima Pett

A time tunnel from the future, a castle seeking paranormal powers, an assignment in foreign parts.

Three separate adventures take us further into the world of Princelings Fred and George. We meet Lord Mariusz finding both opportunity and trouble when he steps back in time; Humphrey, the refugee from the Lost City, seeking somewhere he can call home, and Victor, the ambitious young barkeeper, setting out on his business career, with two, or is it three, assignments to unravel industrial espionage.

The Traveler in Black and White: this prequel to the series enables Lord Mariusz to set the record straight in his own laid-back style. Was he really a profiteering, hard-hearted, opportunistic charlatan? Or just a charming victim of circumstance. He’s certainly charming.

The Talent Seekers provide Humphrey with the opportunity to use his unnatural powers of hearing and memory. He emerges from the obscurity of gangs of refugees and outcasts, victimised by the evil Lord Colman, to become the hero of the hour. But surely, isn’t friendship what it’s all about?

Bravo Victor takes us further away from the Realms than we’ve ever been, showing that inventions and shady deals know no boundaries. Why has Princeling George not returned from the flying festival, and who is trying to smuggle a banned drink into the Realms? Sundance is tasked to find out, but it’s Victor’s expertise that he needs to solve his problems.

This three ebook box set takes us from the discovery of the time tunnel through to the complications of travellers crossing their time lines, while all the while making progress towards an end product: to deliver the promise the Princelings made in the very first book.

What Inspired You to Write Your Book?
When I started writing the Princelings series I had no ambitions past a trilogy.

Then Hugo, the baddie in the first book, wanted his own story, and he really did deserve more airtime, so he got to tell his own story in book 4. That meant that other personalities around me started clamouring for their own books, and the series extended. I realised I had to carry on to the natural conclusion – an incident foretold in the first book.

Time travel is a wonderful thing, if you can keep your timelines untangled!

How Did You Come up With Your Characters?
These characters are mainly based on guinea pigs, mine or my friends, and then other characters who become 'needed' for the stories.

Anthropomorphic characters are generally frowned upon, so I tried to write them as if they are human. But times change, and it seems to me that people are more accepting of furry heroes these days.

So although I classed them as for age 12 upwards, they are really for anyone that likes a bit of light fantasy, intrigue, inter-castle rivalry, a vampire or two, and adventures with flying machines.

Guinea pig or not, your choice.

Book Sample
Back in the relative cool of my apartment I mulled over the tunnel, if that was what it was. Where had it come from and where did it lead to? I sent for one of my trusted aides, a sturdy guy named Willow, veteran of many of our campaigns that are best kept quiet. He slid in as if he’d been waiting for the call.

I was inclined to send him down the tunnel to find where it led, but I was equally intrigued and wanted to have a bit of adventure myself. I’d been sorting cola production and sales for too long this year; it would do me good to have a change of scene.

“Does this tunnel come out somewhere else in the castle?”

He shook his head. “I looked all over, Boss.” I knew I could trust him to have looked already. Some of my guys would tell you anything they thought you wanted to hear. You could always tell. They didn’t last long, even when they were second cousins.

I wandered over to the window and looked out at the shimmering city below, the rivers in the distance like golden mirrors in the sunlight. Send Willow or go myself? Let’s just test it, I thought.

“Ok,” I said, turning back to the cool of the room and picking up a can of Wozna. “I want you to go through the tunnel and find out where it comes out. If it takes longer than an hour to come out anywhere, come back. I’ll expect you back here within two hours. No search party.”

He nodded and left. It was good to know you had some people like that, no questions, just action, with enough brain to use a little initiative but not too much.

I returned to the silk sheet and sipped my Wozna. Two hours would fly by.

There was a knock at the entrance. What now, I thought, but called them in anyway. Willow walked in. Unlike him to have questions on a simple assignment, I thought.

“I went, I came back. The tunnel was still a tunnel after an hour,” Willow replied.

Willow looked at me.

“I thought I got some odd looks as I walked across the yard,” he said, which was the longest sentence I’d heard from him in years. “I went in, it all went strange. I kept walking, it was a dark tunnel. I came back.”

He stood there solidly, matter-of-fact, steady as always. Like I said, it’s good to know you have people like him. He’d not been away more than a minute, but he’d been away two hours. How long could you be away and still be back a minute later? It was almost like time travel. I had to have a piece of this!

I thought for a few minutes. There was nothing I needed to do in the next few days. If I went away for however long it took to find the end of the tunnel I might still be back a minute later. Even if two hours meant one minute and twenty hours meant ten minutes I could still be away for days and nothing important would happen here in my absence.

I waved Willow over to the seat by the water fountain and called an aide.

“Get me provisions for a two-day journey including negotiables and water. Now,” I added. I checked myself over in a mirror. A dark face looked back at me with black brooding eyes. A regal countenance. Black hair with a distinguished white flash. A fit guy, well built, looked like he could handle trouble. Smart black coat, with a nifty white stripe on the side and over the back that went into a snazzy Zorro mark. One black foot, one white, nails neatly trimmed. Well groomed with a touch of class. Yeah, presentable for any occasion, I thought.

“I’m going to take a look,” I said to Willow. “If I’m not back in half an hour you follow me. With luck I won’t be more than three days ahead of you, wherever we’re going, and you should be able to pick up my trail. Okay?”