You are here: Home / *Reading Room / Buyer's Guides / The Power of Love and Murder by Brenda Whiteside 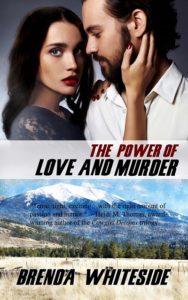 The Power of Love and Murder by Brenda Whiteside

For thirteen years, Penny Sparks has managed to hide from the political powers who murdered her family. When she unwittingly exposes her true identity, not only is she marked for death, but the people closest to her risk meeting the same fate.

Jake Winters is out of rehab and coming to grips with his demons. When he meets his sister’s roommate, Jake believes Penny might be that someone who can help him find life after rock star status…until her secrets blow up his world.

With a government agent turned hit man closing in on her, Penny and Jake race to expose the presidential contender behind the murders of her family. Even if they win the race with death, the murder that stands between them could end their hope for a new life.

What Inspired You to Write Your Book?
I originally set out to write a three book series, but one of the characters, Penny, in book one demanded more than a walk on part. She's had quite a life, and it had to be told. In The Art of Love and Murder, Penny is a young Goth hotel clerk. Book four is her story several years later, but we learn her dangerous past and present.

How Did You Come up With Your Characters?
My characters are purely out of my imagination, but I use pieces of my own life to help create them. For instance, Jake, my hero, is an ex-rocker trying to get his life back together. He's laying tile and one scene involves an awful night in a cheap motel. I lifted that scene straight from my brother's life who was a tile setter for many years. Penny, the heroine, had a small part in the first book of the series. She was a quirky, petite Goth chick and I just knew she had a story. Once I set her up to have her own book, wow, what a story unfolded.

Book Sample
Jake nodded, but all he could concentrate on were Penny’s last words before the officer appeared. When they were alone again, he threw up his hands. “What do you mean, go back to Phoenix? Why the hell would I do that? My sister’s been murdered, and I want to find out why.”
She turned her back on him, went to the open door of the bathroom, and lifted her clothes from the hook. Beneath the thin, hospital gown her spine was straight, her movements tight, as if coiled and ready to spring.
“Penny, I know how much she meant to you.” How much she meant to both of them. He wanted to hold her, share their loss. “I’m not leaving you.”
Untying the gown, she let it drop around her feet, and sidestepped out of the heap. She pulled the dark gray sweater over her head then stepped into black velvet jeans. She wouldn’t make eye contact, wouldn’t speak as she sat on the green plastic chair.
This was killing him. He needed to hold her, help her with her pain—his pain. Haltingly, he made his way to her, touched her head, and waited while she zipped her boots. “Penny.” She resisted, but he tipped her chin, forcing her to look up. “Come on, baby. You don’t have to worry about me leaving you.”
“You will.”
“No—”
“When I tell you the truth, you will.”

Links to Purchase Print Books – Click links for book samples, reviews and to purchase
Buy The Power of Love and Murder Print Edition at Amazon