You are here: Home / Fiction / The Pitcher by William Hazelgrove @Rocketman46 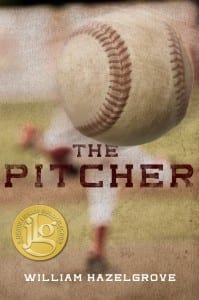 A boy with a golden arm but no money for lessons. A mother who wants to give her son his dream before she dies. A broken down World Series pitcher who cannot go on after the death of his wife. These are the elements of The Pitcher. A story of a man at the end of his dream and a boy whose dream is to make his high school baseball team. In the tradition of The Natural and The Field of Dreams, this is a mythic story about how a man and a boy meet in the crossroads of their life and find a way to go on. You will laugh and you will cry as The Pitcher and Ricky prepare for the ultimate try out of life.

Targeted Age Group:
Highschool and up

How is Writing In Your Genre Different from Others?
I think whenever you tell a story that can appeal to all age groups you have to keep it focused on the characters. Character is action as F. Scott Fitzgerald said.

What Advice Would You Give Aspiring Writers?
Write to the best of your ability and never give up.

William Elliott Hazelgrove is the best-selling author of three novels, Ripples, Tobacco Sticks and Mica Highways. His books have received starred reviews in Publisher Weekly, Book of the Month Selections, ALA Editors Choice Awards and optioned for the movies. He was the Ernest Hemingway Writer in Residence where he wrote in the attic of Ernest Hemingway’s birthplace. He has written articles and reviews for USA Today and other publications. His latest novel Rocket Man was chosen Book of the Year by Books and Authors.net. He has been the subject of interviews in NPR’s All Things Considered along with features in The New York Times, LA Times, Chicago Tribune, Chicago Sun Times, Richmond Times Dispatch, USA Today, People, Channel 11, NBC, WBEZ, WGN. He runs a political cultural blog, The View From Hemingway’s Attic.

What Inspired You to Write Your Book?
I heard about an old pitcher who lived across the street from my mother in law in Florida and when we went there my son and I went into the street and started playing ball. One night the garage went up and the old pitcher came out and gave my son some pointers on how to pitch. Then he went back into his house and I never saw him again. It was true, he had been a World Series Pitcher. And I had a book.