You are here: Home / Bargains and Freebies / Bargain Books Under $3 / The Philosopher’s Guild by Daniel Trump 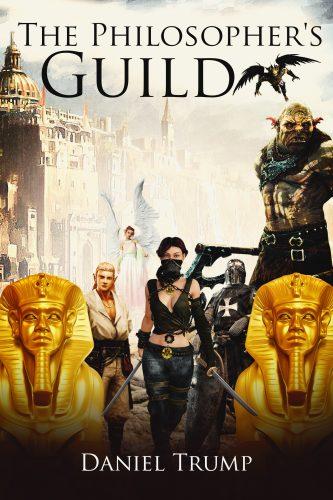 Adventure in the city-state of Lothen where any dream can come true…but any nightmare can also happen. A group of young people forms an intellectual group that fights injustice and tries to save Lothen from sinister threats.

What Inspired You to Write Your Book?
I wanted to write an intelligent fantasy novel with characters based on famous philosophers. I thought that this would be a unique and interesting literary experiment.

How Did You Come up With Your Characters?
I used real-world philosophers as templates for my characters – which helped enormously for making characters. These people practically made themselves.

Book Sample
War cries echoed. People bellowed threats to the other side. Phillip hadn’t ever hurt anyone; he just wanted to do the right thing, and right now he wanted to defend the city. Arrows from the barbarians hit several soldiers on the ramparts. They gushed blood from their bodies. Screams ricocheted through the battlefield. The soldiers fired their arrows at the horde of barbarians. Enemies fell, injured or dead. A couple of soldiers turned to Phillip, injured, and pleading for help in their eyes.
“Let’s get them to healers,” Phillip said. He ran up to the first one and tried to drag him away from the battle. Phillip dragged him about ten feet before realizing that he was dead, just dead, and Phillip could barely drag him ten feet anyway.
Fighting is horrible, he thought. These people are dying. They won’t walk, or talk, or eat, or sleep, ever again. He grabbed one that was alive and helped him to walk back to the stairs and helped him down to the mages. Phillip spoke to a mage, Denitrin. The mage’s eyes glowed with fiery energy and he focused.
“Get him to medical,” Phillip said.
“Of course,” Denitrin said.
Phillip ran back towards the battle, huffing and puffing already as he ran up the stairs. He heard the multitude cacophony of battle – swords hitting swords, swords hitting flesh, arrows loosed, mages chanting, priests chanting prayers, buildings burning, people screaming, people yelling at people, orders distributed, and confused commoners begging for help.
Arrows flew near his body. Phillip ducked to dodge the shortbow fire and got out his longbow. He grabbed an arrow and loosed it. Misfire – the arrow flew off in the wrong direction. He reloaded. He fired again, more carefully this time. He hit a barbarian in the head, killing him.
Was that man more important than me? he thought. There was no chance to do a total review of that person’s innocence or guilt. More important – they fought hundreds of people. Some of them had to be wonderful people. Philip looked down at some of the barbarians chopping up civilians and taking their stuff and burning buildings and changed his mind quickly. He wanted to kill them and felt good about killing them. He had caught them, caught them cold. He began to enjoy this.