You are here: Home / Bargains and Freebies / Bargain Books Under $3 / The Persistence of Memory by Karen Janowsky 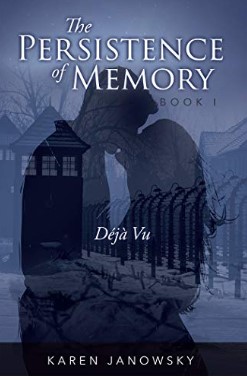 The Persistence of Memory by Karen Janowsky

When superheroes fall in love, anything can happen.

Daniel Hecht doesn’t belong in this century. Catapulted into the present from 1943, he’s out of place and out of touch. Still, he was the American war hero called “Lionheart” and his heroism has followed him into the modern world. He now leads an underground group of superpowered misfits, but the misfit he keeps turning to is Nina Asher.

Nina has a vast knowledge of history, yet no idea who she is or where she’s from. She has become the target of dangerous creatures that have appeared all over the world. As she and Daniel work to decipher an ancient, cryptic myth, they experience flashbacks to things that never could have happened. They are falling in love, but there’s something they’re sure they need to remember, and it’s keeping them apart.

The key to saving the world may begin with the act of remembering.

This trilogy begins with a slow-burn romance in Book 1, and, as the action and conflict build, the relationship between the characters moves into the realm of steamy romance, bordering on erotica.

What Inspired You to Write Your Book?
This story stems from my lifelong fascination with ancient mythology and their modern counterparts, superheroes. I also am a big fan of romance and adventure, and all of these elements went into the trilogy and its themes.

How Did You Come up With Your Characters?
They are composites from features I found interesting about different mythological and superhero characters. I drew from several different traditions, and did a lot of research to decide what they were like and what they could do.

The mid-sized brownstone, which had been parceled into smaller apartments, felt like a place of respite when Daniel had moved in three years ago. It had reminded him a little bit of his childhood home except the neighborhood, with its smooth, tree-lined sidewalks and working street-lamps was a lot cleaner, and the landlord kept the building and its apartments in good repair.

He wondered if he could just rent out a closet to unplug himself, as if he was a robot powering down for the day. It wasn’t like he had much of a life beyond what he did at work. He thought about his routine: shower, dinner, read a book, and watch some baseball until he passed out. Not for the first time, he mused that he might look like he was twenty-eight, but there was no question that he lived like an old man. “America’s walking symbol of might,” he muttered. “Yup. That’s me.”

He took a deep breath and closed his eyes before opening the apartment building’s door, trying to exhale and erase the last three hours of his workday. He had been training his ROTC cadets at Roosevelt University outside in the mud for most of the afternoon. That wasn’t a hard thing in itself. Today his boss, accompanied by some important military recruiters, had come unannounced to watch him. He had decided to crank up the performance by a notch or three and, to his surprise, the cadets had balked. All through the hot afternoon, going through drill after drill with whiny cadets, Daniel had longed for a few days in the field on active duty, chasing down arms dealers. He’d take that over the rude laziness of this newest batch of entitled, apathetic students any day, especially considering today’s embarrassing display. Afterward, he had endured a spectacular chewing out by Rob Fisher, then by a couple of other higher-ups. Now tired, sweaty, and, although he wouldn’t dare admit it to anyone, a little achy, he was ready to end his day. He opened the door, grateful to close it to the world behind him.

He stood at the bottom of the stairs and noticed a small sofa blocking the path to his apartment. He put his hands on his hips, let his shoulders slump, and his head dropped toward his chest as he shook it. Straightening and backing up from the first step, he ran toward the sofa and jumped. His left leg twisted between cushions, sinking into the deep crease where the seat and back met. Pressing his palms flat on the floor to balance his weight, he tried to dislodge himself, but ended up taking an awkward lunge. Letting out a deep sigh, he surveyed the mess he had made.
“Sorry about that,” said a voice.

Daniel twisted in the direction of the voice. A young woman stood at the threshold of the building’s only first-floor apartment. From this angle, he couldn’t see her face right away. She was wearing light purple sneakers and torn-up jeans that hugged the bottom half of her hips. Her darker purple t-shirt, damp down the center, skimmed her narrow waist, emphasizing the roundness of her breasts.

She said something else, but his brain had gone momentarily numb. He looked up and stared at what seemed like Helen of Troy, come to life. She was stunning. Her eyes were large, with long eyelashes. Her nose was small and straight, and her mouth was full, evenly proportioned, and dark pink. Her black hair was pulled back in a long ponytail. The remote, artistic part of Daniel’s brain, which he’d thought long-buried, lit up. His long-abandoned sketchbook sprung to mind momentarily. He refocused.

“I should’ve asked the movers to bring this inside, but they said it was too bulky and it would cost extra,” she was saying. “I didn’t want to pay the extortion money. It’ll be out of your way as soon as I figure out how to maneuver it.” She smiled.

Daniel swallowed hard. He saw pretty women all the time. In fact, because of his unique standing at the university, he was a frequent recipient of unwanted female attention. They either came on too strong or acted awestruck, or they were way too young and silly. As a general rule, he disliked his semi-celebrity status as a youthful hero from a bygone era. If this woman showed interest, he admitted to himself, he might not mind so much. Her hands rested on her hips, as if she was waiting for him to say something. Had she asked him a question? “Very nice, schmuck,” he thought. He prided himself on not being the kind of man who leered at or objectified women, but he couldn’t stop staring, all the while thinking, “I’m no better than the rest of them.” He used his hands to yank his foot out, rolled sideways, and hit his head on the banister. The banging of his skull against cast-iron bars clanged through his head.

“Are you alright?” She was a few steps closer now, just at the foot of the stairwell, looking up at him.

“Yeah.” He rubbed the back of his head. “I think your couch ate my shoe.” He put on what he hoped was a charming smile, then lurched forward as he tried to sit up straight. He barely avoided somersaulting over the couch and slid gracelessly down the stairs. He ended up sprawled on the floor looking up. It wasn’t a bad view. “Uh…do you need some help moving this, ma’am?” He pushed himself up to sit. He wondered why on Earth movers would just plunk someone’s stuff outside their door and leave, or demand extra to do their job, especially, when it was a beautiful girl who needed help. He fought the urge to voice his indignation at her treatment.

“Only if you’re up to it.” She waved a hand in front of him. He could feel his face heating. “I think you hit your head pretty hard.” She regarded him with concern. “I’m Nina, and I’d love the help, but can I help you first?”

“Oh, right. Yeah. I’m Daniel. Sure thing. I mean, I’m fine. Sure, I’ll help, thanks.” He figured he could find a picture of himself in the dictionary later, next to the word ‘awkward’. Then again, he also was pretty sure that he was one of the few people left on the planet who used a physical book for a dictionary. He slid himself down, careful not to topple the thing backward and onto her. Nina grabbed his arm to steady him as his he got to his feet.

Her skin was smooth and cool. Up close, he saw that her eyes were dark blue, almost indigo. Her complexion brought to mind a beach whose sand was soft, with a touch too much peach undertone to be called tan. She even smelled like the beach: seawater, driftwood, and some tropical flower. Jasmine, maybe. He was dizzy for a moment, as if he’d smacked his head again. He wobbled as he balanced between the one shod and one bare foot. He pulled his hand away and stepped back more abruptly than he’d intended. Nina’s brow furrowed. Daniel looked down at the sofa. “No. Yeah.” His voice was a hair higher than he would have liked. “I mean, I’ll help you get everything inside. Then uh…maybe I can get my shoe and sock out of your furniture.” He shifted his weight to his bare foot, wishing he’d been less awkward and more charming. He was perpetually stupid around dames. Women.

About the Author
Goodreads