You are here: Home / Fiction / Romance / The Perfect Cast by T.K. Chapin 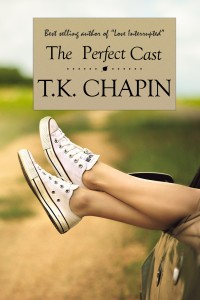 The summer before her Senior year at High School, Jess is forced to visit the one man she despised the most in the world, her grandfather. He was the reason for the split between her parents and now she has to spend the entire summer at his farm, away from her home in Seattle.

A mundane summer ahead of her suddenly changes when she meets Clint Foster, the man who has everything going for him. Successful, charming and gorgeous, could he be the one?

Trading in her punk rock concerts for chicken coops and her sneakers for cowboy boots; Jess finds this summer to be one of transformation that will leave her world forever changed.

What Inspired You to Write Your Book?
God inspired me to write this book. There’s a world of pain, suffering and confusion with who God is and what kind of impact he can have in the lives of people. I wanted to shine light on a couple different perspectives and ways people might process the world. Through the eyes of another we are able to see the world differently.

How Did You Come up With Your Characters?
I use tiny little slivers of truth from the world around me and the people in it. Jess for instance is an eighteen year old kid who thinks she’s an adult and knows everything. I fished that from my own personal experience plus what I’ve seen in others. Levi is a country guy, I used the people I have met and combined them with elements of a “good but not a Christian” guy.

Book Sample
Prologue
Each of us has moments of impact in life. Sometimes it’s in the form of love, and sometimes in the form of sadness. It is in these times that our world changes forever. They shape us, they define us, and they transform us from the people we once were into the people we now are.
The summer before my senior year of High School is one that will live with me forever. My parents’ relationship was on the rocks, my brother was more annoying than ever, and I was forced to leave the world I loved and cared about in Seattle. A summer of change, a summer of growth, and a summer I’ll never forget.

Chapter 1 ~ Jess
Jess leaned her head against the passenger side window as she stared out into the endless fields of wheat and corn. She felt like an alien in a foreign land, as it looked nothing like the comfort of her home back in Seattle.
She was convinced her friends were lucky to not have a mother who insisted on whisking them away to spend the entirety of their summer out in the middle of nowhere in Eastern Washington. She would have been fine with a weekend visit, but the entire summer at grandpa’s? That was a bit uncalled for, and downright wrong. Her mother said the trip was so Jess and her brother Henry could spend time with her grandpa Roy, but Jess had no interest in doing any such thing.
On the car ride to grandpa’s farm to be dropped off and abandoned, Jess became increasingly annoyed with her mother. Continually, her mother would glance over at Jess looking for conversation. Ignoring her mom’s attempts to make eye contact with her, Jess kept her eyes locked and staring out the window. Every minute, and every second of the car ride, Jess spent wishing the summer away.
After her mother took the exit off the freeway that led out to the farm, a loud pop came from the driver side tire and brought the car to a grinding halt. Her mom was flustered, and quickly got out of the car to investigate the damage. Henry, Jess’s obnoxious and know-it-all ten-year-old brother, leaned between the seats and glanced out the windshield at their mom.
“Stop being so annoying,” Jess said, pushing his face back between the seats. He sat back and then began to reach for the door. Jess looked back at him and asked, “What are you doing?”
“I’m going to help mom.”
“Ha. You can’t help her; you don’t know how to change a tire.”
“Well, I am going to try.” Henry climbed out of the car and shut it forcefully. Jess didn’t want this summer to exist and it hadn’t even yet begun. If only she could fast forward, and her senior year of High School could start, she’d be happy. But that wasn’t the case; there was no remote control for her life. Instead, the next two and half months were going to consist of being stuck out on a smelly farm with Henry and her grandpa. She couldn’t stand more than a few minutes with her brother, and being stuck in a house with no cable and him? That was a surefire sign that one of them wasn’t making it home alive. Watching her mother stare blankly at the car, unsure of what to do, Jess laughed a little to herself. If you wouldn’t have left Dad, you would have avoided this predicament. Her dad knew how to fix everything. Whether it was a flat tire, a problematic science project or her fishing pole, her dad was always there for her no matter what. That was up until her mother walked out on him, and screwed everybody’s life up. Now he’s gone and out of the country on a three month hiatus. Jess figured he had a broken heart and just needed the time away to process her mom leaving him in the dust.
Henry stood outside the car next to his mother, looking intently at the tire. Accidentally catching eye contact with her mother, Jess rolled her eyes. Henry had been trying to take over as the man of the house ever since the split. It was cute at first, even to Jess, but his rule of male superiority became rather old quickly when Henry began telling Jess not to speak to her mother harshly and to pick up her dirty laundry. Taking the opportunity to cut into her mom, Jess rolled down her window, “Why don’t you call Grandpa? Oh that’s right… he’s probably outside and doesn’t have a cell phone… but even if he did, he wouldn’t have reception.”
“Don’t start with me Jess,” her mother scowled at her. She watched as her mother turned away from the car and spotted a rickety, broken down general store just up the road.
Her mom began to walk along the side of the road with Henry. Jess didn’t care that she wasn’t invited on the family trek along the road. It was far too hot to walk anywhere, plus she preferred the coolness of the air conditioning. She wanted to enjoy the small luxury of air conditioning before getting to her grandpa’s, where she knew there was sure to be nothing outside of box fans.
Jess pulled her pair of ear buds out from the front pouch of her backpack and plugged them into her phone. Tapping into her music as she put the ear buds in, she set the playlist to shuffle. Staring back out her window, she noticed a cow feeding on a pile of hay through the pine trees, just over the other side of a barbed wire fence. I really am in the middle of nowhere.

Buy The Perfect Cast On Amazon