You are here: Home / Children and Young Adult Books / The Owl Wrangler–Book One of The Seldith Chronicles by William Vaughn @vaughnwilliam

Imagine a world where an itinerant clan of forest elves no taller than a mushroom lives amongst the roots of towering fir trees of a stony canyon. When Gollsaer, the clan’s Owl Wrangler mysteriously disappears, his teenage son Hisbil must take on the perilous duty or face exile from the clan. Wanting to clear his father’s name, Hisbil gets help from his pesky little sister, who can heal with a touch; a pretty and clairvoyant classmate, who knows what’s on Hisbil’s mind before he does; and an exiled clansman, whose motives are far from pure. Armed with little more than a wand, an old broken sword and an awakening spell he’s never used, Hisbil and his elven cohorts endure a harrowing odyssey of danger, deception, betrayal, and battle until Hisbil finally discovers the real truth about his calling, his father and his clan.

“In the tradition of the novel, Watership Down, the Owl Wrangler is a must read for those who enjoy adventure with a splash of fantasy.” Pam Binder, NY Times best-selling author and President Pacific Northwest Writers Association 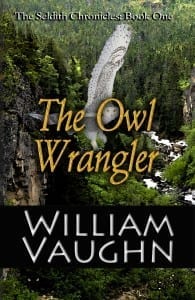 What Advice Would You Give Aspiring Writers?
Learn your craft. Learn to solicit and accept criticism from those who know what they’re talking about and will tell you the truth. Hire people to do what you cannot do. This includes editing, copy editing, proofing, book design, cover design and publishing. Remember that most authors by far don’t make a living practicing their craft–they do it because they have to.

Author Bio:
William Vaughn is an award-winning and best-selling author who has been delighting readers for decades. Translated into a half-dozen languages, his books are enjoyed by readers all over the world. The Seldith Chronicles is his latest 5-star series following the exciting exploits of a teenage forest elf about five-inches tall. Brought up in a family that never lived anywhere more than three years, Bill settled in the Pacific Northwest nearly thirty years ago. He’s also an avid nature photographer and environmental activist. His travels have inspired a number of interesting and quirky characters in his books, as well as providing him with a true sense of nature, diverse cultures and points of view. He’s raised two daughters and has a couple of granddaughters who provide an endless bounty of storylines.