You are here: Home / Fiction / Action & Adventure / The Orphanage of Miracles by Amy Neftzger 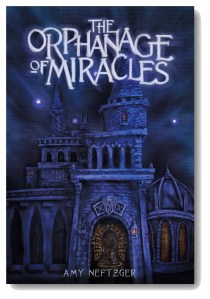 Perhaps everyone could use a miracle, but very few will find the one they truly need.

Amid a war torn land, hidden deep within an enchanted forest, hides an orphanage where miracles abound. It s a magical place built by a resolute king who is determined to defeat an evil sorcerer waging bitter war against his people. Victory just might take a miracle, and so the orphanage may very well hide the key to winning the war.

A young girl named Kelsey also desperately needs a miracle. She embarks on a quest to find the mysterious and hidden orphanage. Along the way she s joined by several traveling companions, including an over-sized snow leopard and a boy who cannot speak. In a land enchanted, it’s difficult to know the difference between what’s real and what isn’t … and what a true friend looks like. Join Kelsey and her companions as they embark on an extraordinary adventure and a quest unlike any other.

The Orphanage of Miracles is a work of fiction that examines the concept of miracles and what it takes to find or make the one you need.

What Inspired You to Write Your Book?
Miracles and how we relate to them are a fascinating topic for me. There’s a wide range of approach and beliefs surrounding them, and these lend to story telling very easily.

How Did You Come up With Your Characters?
I wanted a strong female lead, so I created Kelsey who can be a bit hot-headed at times. I also wanted a more reflective and thoughtful character, so I alternated Kelsey’s story with the narrative surrounding Nicholas.

Book Sample
The day Nicholas arrived at the orphanage, the autumn came and never went. He could remember a time when there had been winters, springs and summers, just as he remembered a time when he had parents. But they were all gone now. And Nicholas was here, living in a rather tall stone building that was something of a cross between a cathedral and a small castle. He didn’t know who had built it or why it was now an orphanage. He didn’t even know what month it was, and no one seemed to care that the seasons never changed. Time was measured differently here.

Nicholas felt the crisp, morning air tingling on his face as he opened the heavy window shutters and filled his lungs. He could see fingers of sunlight reaching through the branches of the trees in the forest. It might have even been the enchanted forest, but one could never be sure. Everyone knew that the orphanage had an enchanted forest on one side, but no one seemed to know exactly on which side it was located. Every time someone identified where it was, it seemed as if that part of the forest moved somewhere else. Because of this, people who left the orphanage grounds usually never found the way back. Return visitors were scarce. Nicholas had never even seen a visitor at all. He saw only new children as they arrived, as if from nowhere. The residents of the orphanage lived almost completely in isolation from the rest of the world. That’s because the orphanage was their whole world.

About the Author:
Amy Neftzger published her first fiction book Conversations with the Moon in 2003. Since then she has published books for both children and adults, including All that the Dog Ever Wanted, Bedtime Stories for Dogs, Bedtime Stories for Cats, Leftover shorts, Confessions From a Moving Van, The Orphanage of Miracles, and The Ferryman. She lives in Nashville with her family and pet gargoyle Newton.